Kibble Blade is a mid-boss that appears in Kirby's Return to Dream Land, Kirby's Dream Collection: Special Edition, and Kirby: Planet Robobot. He grants Kirby the Cutter ability when inhaled after his defeat.

Like King Doo, Water Galboros, and Moundo, he is a larger and more powerful version of the enemy he is based on, in this case, Sir Kibble. It is unknown if he is a leader to all Sir Kibbles or has any kind of influence in their ranks.

Kibble Blade looks like a much larger version of Sir Kibble, but with more detailed armor. His helmet is a lot more knight-like in appearance, complete with a double visor. He also has shoulder-pads, red gloves, and pointed steel boots that are slightly curled up towards the end. Like his smaller counterpart, Kibble Blade has a cutter of his own set onto the top of his helmet, this one being both white along the top and yellow along the bottom. Unlike Sir Kibble's cutter, this one is divided into a few segments down the length of it, making it look like a mohawk. Everything except for his shoulder-pads and cutter is colored silver.

In Extra Mode, Kibble Blade retains the silver armor around his body, but his visor, gloves, and boots are all black. In addition to this difference, his shoulder-pads are now red. The blade situated on his head still remains the same in appearance.

In Planet Robobot, Kibble Blade's armor is slightly altered, and there are visible nuts and bolts on his shoulder plates, visor and boots.

Kibble Blade 2.0's armor is colored completely gold, his gloves have been changed to black, and his cutter is now colored with an outer white portion and an inner dark gray portion.

At the start of the battle, Kibble Blade's cutter will fold out in segments, and his double visor will pop open. Kibble Blade will then attack by throwing a cutter boomerang, much like its weaker counterpart, but only stronger and much larger. He can either simply hurl it ahead or try to curve it towards the players if they are too far away. He also tries to ram into Kirby; lowering his helmet and trying to quickly rush forward like a bull. The impact he creates after hitting the other side of the screen (as well as whenever one of his cutters hits the floor or walls) always generates a star for Kirby to use against him. Kibble Blade can also flash white for a brief second and leap into the air a short distance. When he does this, he will diagonally throw his cutter at Kirby straight down if he's close enough. Another technique he uses is to throw one of his cutters in the opposite direction the player character is standing, then curve it so that it flies back at him/her. Kirby can also inhale his cutters with a Super Inhale.

In his EX form, Kibble Blade's charging attack is much faster than usual. Like the other EX bosses, his past moves now deal more damage than they usually did. He also has the ability to enlarge his boomerang to an even greater size before throwing it.

Beginning from Planet Robobot and Team Kirby Clash Deluxe, Kibble Blade is given a new attack. He removes the cutter boomerang from the top of his helmet and spins around wildly with it held outward, moving back and forth out of the foreground and background until he comes back to his original position. 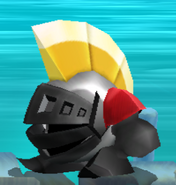 Team Kirby Clash Deluxe
Add a photo to this gallery
Retrieved from "https://kirby.fandom.com/wiki/Kibble_Blade?oldid=249919"
Community content is available under CC-BY-SA unless otherwise noted.