Carry Dees[1] are a supposed variant of Waddle Dees in Kirby's Return to Dream Land, who invariably hold a key when encountered. They are usually part of puzzles which Kirby has to solve in order to get the key to unlock a door to retrieve Energy Spheres or power-ups. Carry Dees will run with the key, and the player must commonly reach the Carry Dee first and take the key before it either destroys itself by running into an obstacle or wastes the key by using it to open a door containing Scarfies or other enemies.

Compared to Waddle Dees, Carry Dees have distinctive red swirls on their cheeks and a stubby tail, both of which are unique only to Carry Dees. They have black blotches for eyes too, rather than the big, round ones that Waddle Dees have.

Their color scheme is also unusual for Waddle Dees, as they have yellow bodies, pink faces, and their hands and feet are brown. All this makes them resemble a generic monkey more than Waddle Dees. 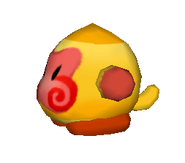 Retrieved from "https://kirby.fandom.com/wiki/Key_Dee?oldid=139596"
Community content is available under CC-BY-SA unless otherwise noted.