Regular enemy
Key Dee[1] (also referred to as Carry Dee[2] and Wonkey[3]) is an enemy in the Kirby series, debuting in Kirby's Return to Dream Land. It is a variant of Waddle Dee and carries a key everywhere it goes.

Compared to Waddle Dees, Key Dees have distinctive red swirls on their cheeks and a stubby tail, both of which are unique to Key Dees. They have black blotches for eyes too, rather than the big, round ones that Waddle Dees have.

Their color scheme is also unusual for Waddle Dees, as they have yellow bodies, pink faces, and their hands and feet are brown. All this makes them resemble a generic monkey more than Waddle Dees.

Key Dees are usually a part of puzzles which Kirby has to solve in order to get the key to unlock a door to retrieve Energy Spheres, power-ups, or other collectables. Key Dees will run with the key when he appears, and the player must commonly reach the Key Dee first and take the key before it either KOs itself by running into an obstacle or wastes the key by using it to open a door containing Scarfys or other enemies.

In Kirby: Triple Deluxe, Key Dees are usually seen running in the background. Some Key Dees stand in the foreground but retreat to the background when Kirby approaches. They can also sometimes be seen riding skis. They are once again used to collect items such as Sun Stones.

In Dededetour, Key Dee is replaced by a white variant of itself that runs much more quickly than ordinary yellow Key Dees. This makes it harder for the player to catch it and use its key to gain access to Warp Holes.

Key Dee carries batteries as they are this game's replacement for keys. The white Key Dee makes an appearance again, this time in Meta Knightmare Returns.

As there are no keys in this game, Key Dee carries a gold Score Coin. It stands idle with its treasure, but when Kirby approaches, it runs off the edge of the platform it is on. To get the coin, Kirby must defeat the enemy from afar using a Star Bullet.

Key Dee appears once again in Kirby Star Allies. It is mostly seen when Kirby and his friends use the Friend Bridge. Key Dee runs across the bridge, usually with the Star Allies moving up or down to guide it to the locked door. Occasionally, however, Key Dees also appear outside of Friend Bridge sections, functioning as they have in previous titles.

In addition to the fact that Key Dee is always seen carrying a key, its name may be taken as a pun on the word "monkey," as the last three letters of the word are "key." This is supported by Key Dee's rather monkey-like appearance. 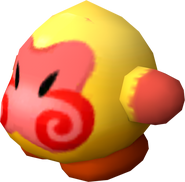