Kapar is an enemy in the Kirby series, debuting in Kirby's Dream Land 3.

Kapar is a green, duck-like enemy with webbed, dark green feet and round eyes. The crown of his head as well as his beak are yellow, and he wears a dark green hat.

Kapar first appeared in Kirby's Dream Land 3. He sits in one place, and occasionally jumps up and throws his spiky, hollow hat atop his head at Kirby. He is also capable of swimming and appearing underwater. Kapar gives the Cutter ability when inhaled.

In Kirby 64: The Crystal Shards, a giant Kapar appears in Aqua Star Stage 3 as the mid-boss, with two Bumbers to spit out at him. This also makes the giant Kapar the first mid-boss to not have smaller versions of himself for Kirby to inhale and spit back at him, but instead different enemies from himself. 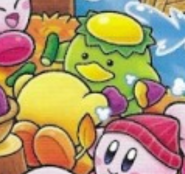 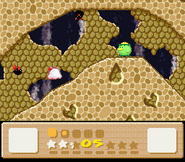