Kabula has arguably had the most radical redesigns in the series. She first appeared as a yellow blimp with a Shotzo underneath her. She also had a strange, pink eye-like hexagon on her. She would keep this design in Kirby's Block Ball, however she would have two Shotzos mounted on her sides instead of one on her underside.

In Kirby Super Star Ultra, Kabula was given a more notable redesign. She now has a tan patchwork fabric stretched over her hull and a menacing face spray-painted on her head. Her fins are now orange and her blaster is a regular cannon rather than a Shotzo. There is a simple turbine engine on her rear that looks more like a basic fan. She is also a lot larger than she was before, meaning that the one in Kirby Super Star Ultra might be a different one.

In Kirby: Planet Robobot, Kabula is seemingly mechanized (or modified, as she's already a machine), like most of Planet Popstar, with clear rivets in her. She also features a second cannon mounted to her top, and the cannon inside her is seemingly more advanced, now capable of firing a number of different projectiles besides missiles. She retains the overall design of her previous appearance however.

Kabula's first appearance was in Kirby's Dream Land as a normal blimp with a cannon. She is one of the servants Dedede trusts to guard one of the Sparkling Stars. The battle against Kabula at the end of Float Islands fully takes place in air. Kabula, who has two more health bars than other bosses, shoots flurries of bullets and dashes at Kirby. In advance to this battle, Kirby swallows a special Mint Leaf, which allows him to spit unlimited air puffs at Kabula. Kirby simply has to shoot the air puffs at her to win, but she is constantly moving around, making the battle much more difficult.

In the Extra Game, Kabula is much more aggressive; she will shoot more bullets at a much faster rate than before and charge at Kirby more unexpectedly.

Kabula serves as the boss of Stage 9. Before the boss fight, it flies back and forth in the upper-middle portion of the Target Shooting Area; hitting her four times causes her to flee and a Warp Star to descend from the ceiling. Touching it takes Kirby to the boss.

During the boss fight, Kabula flies back and forth in the center of the area. Using two cannons, she shoots cannonballs downward and at slight angles. Any paddles that are hit by these cannonballs shrink, and thus temporarily become less useful in protecting Kirby from the spikes. Like all normal bosses in the game, Kabula has 12 HP.

Kabula makes a cameo in the title screen's opening animation.

Kabula is the boss of the fourth level of Revenge of the King. She has been ordered by King Dedede to guard the skies above Mt. Dedede, where she lies in wait for Kirby. She successfully blasts the arriving Kirby off his Warp Star, causing him to fall to the ground below. Nevertheless, the Sparkling Stars come to his rescue and merge into the Starship. Kirby returns on the star craft to engage Kabula in combat.

Although her cannonballs can now be shot down, her attacks have been upgraded as she can shoot Gordos and shoots groups of bullets rather than individual ones more frequently. Unlike in Kirby's Dream Land, the Starship's stars cannot pass through Gordos and are destroyed when colliding with a cannonball. She retains her ramming attack from Kirby's Dream Land. When her health is low, she will try to overwhelm Kirby by swarming the stage with powerful large missiles that are similar in appearance to Banzai Bill from the Super Mario series (albeit bearing more resemblance to Kabula herself). As a last struggle to defeat Kirby, she fires four missiles in a row if her health is low. After her health is completely depleted, Kabula is engulfed in flames, deflates, and crashes into the ground below. Kabula reappears in The True Arena as one of the first six bosses. If a computer helper is taken in to the battle with Kabula, the helper will disappear immediately and will not be present after the battle, much like with the Galactic Nova Nucleus.

Kabula makes a cameo appearance in the Scope Shot sub-game. She flies slowly by in the distance and can be targeted for bonus points. She can be taken down with a single shot.

Kabula appears as two different collectible keychains in this game.

Boss
Kabula reappears in this game as a boss, referred to as Core Kabula. She is used by the Haltmann Works Company to serve as an enforcer and power source for the Laboratory in Gigabyte Grounds. In Stage 4 of Gigabyte Grounds, Core Kabula emerges from a defeated C.O.G.S. and engages Kirby, who fights her with his Robobot Armor's Jet Mode. Core Kabula has two cannons, much like in her appearance in Kirby's Block Ball, but she also has a larger cannon built inside her blimp section, which can shoot flames and lasers. In addition, Core Kabula makes use of both the foreground and background to harass Kirby. Core Kabula is also able to fire Gordos from her cannons.

The instruction booklet for Kirby's Dream Land refers to Kabula as a female, despite being mechanical and non-sentient. In the real world, battleships, planes, blimps, and other large vehicles are often referred to using feminine pronouns, despite being non-sentient and genderless, which was another possibility.

In Kirby Super Star Ultra, Kabula was now given a more feminine appearance—having large eyelashes surrounding her eyes and a pink nose cone. Kabula still had conflicting gender details, such as being referred to as the "sky lord" (lord is normally a masculine title of nobility, and the correct word would be "lady," though there have been some exceptions to this rule in real life) and "it" both in the same description.

In Kirby: Planet Robobot, she is referred to in a more gender-neutral way, being referred to as the Kabula on the Pause Screen. However, in the French version of the game, Kabula is referred as female.[1]

Kabula's name may be a reference to the onomatopoeia "ka-boom," the sound of an explosion; this is more evident in the original spelling of her name, "Kaboola." 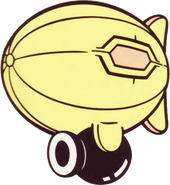 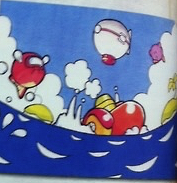 Kabula as seen in the Kirby's Dream Collection manual.
Add a photo to this gallery 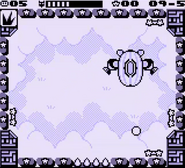 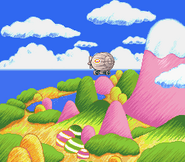 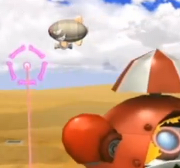 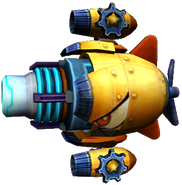 Kirby: Planet Robobot (missile)
Add a photo to this gallery

Retrieved from "https://kirby.fandom.com/wiki/Kabula?oldid=344062"
Community content is available under CC-BY-SA unless otherwise noted.