Kirby Wiki
Register
Don't have an account?
Sign In
Advertisement
in: Enemies, Characters, Articles with non-canonical information,
and 30 more
English

Kabu (spelled Kaboo in Kirby's Pinball Land) is a recurring enemy in the Kirby series, debuting in Kirby's Dream Land. It yields no Copy Ability when inhaled.

Kabu is a brown statue of a head. It has a flat base that rounds off at the top, two deep black square eyes and between those sits a slight nose. A gaping, open mouth appears beneath the eyes and nose.

Kabu can be found in Float Islands. It appears sliding about while spinning. It will fade in and out of view to surprise Kirby. Its movements are random and do not actively hunt out Kirby.

Kabu is replaced in the Extra Game with Grumples. Grumples is faster and more frantic in its movements.

Kabu is a common enemy in this game. Some Kabu will erratically move across the ground, while others will actively hunt down Kirby. Additionally, some Kabu will rocket towards the sky if they are left alone for long enough, leaving the area.

Kabu appears on the bottom stage of Whispy Woods Land. Three Kabus line each of the upper corners. Once all six are pounded in, the enemy known as Big Kabu who rests in the middle of the star will explode. Landing on the spot at which the enemy once sat will allow Kirby to be fired in one of five directions. If timed correctly, Kirby can send himself into the middle level of the stage this way.

Kabu is a common, grounded enemy. It has no power and poses no threat.

Kabu is the sixth challenger faced in the tournament. The exchange between it and Kirby is as follows:

Kabu will appear in the air without notice. When it hits the ground, it bounces around for a while and then jumps back into the air, disappearing.

Kabu appears in the Target Shooting Area of Stage 3. After four hits, Kirby defeats it and moves on to fight a large Kabu boss. It produces and fires smaller Kabus that shrink any paddles they touch.

Instead of appearing from air, Kabu is released by Dekabu. It simply bounces on the ground until it goes off the screen. They can easily be jumped over and do not disappear/reappear. Instead of facing the screen, Kabus only face left or right. This is the only game in the series in which they do this.

Kabu (in its anime design) sits motionless in the lower right hand corner of the Water stage in Top Ride.

Kabu acts like it has in previous games. To fit the games' three-dimensional theme, it floats slightly toward and away from the screen as it moves left or right across the plane it's on. In Kirby: Triple Deluxe, the enemy can be spat out by Dekabu, though this does not happen in Kirby: Planet Robobot.

Kabu first appears in Stage 1 of Level 4 and is a common threat in throughout the entire level. It simply slides around the ground, not jumping, vanishing, nor speeding up. Like most enemies in the game, scaled-up versions of it appear that can be Inhaled for a Blaster Bullet.

Kabus appear as audience members in most game modes.

Kabu appears as an enemy in this game. He retains his basic behavior from previous Kirby games.

Kabu returns as an enemy, remaining the same behavior from previous games. He can also be spat out by a Big Kabu. However, he only vanishes if he is damaged but not destroyed.

Kabu appears in several of the games throughout the series. Generally, its behavior is confined to spinning around while sliding back and forth. It is also known for fading away and suddenly coming back, leaping about, or occasionally rocketing into the sky on a jet boost. In Kirby: Canvas Curse, he is drawn in Paint Panic.

Kabu makes several appearances in Kirby: Right Back at Ya!, mainly because of his role of the hiding place of the Warp Star.

In the anime, he is a large totem that the Cappies approach for answers to various problems. It was he who prophesied that a hero, a Star Warrior by the name of Kirby, will come to Dream Land to defeat the monster plaguing them. In another episode, he tells Tiff and Tuff of Nightmare and his company, Nightmare Enterprises, how Nightmare made his creations, and that one of them failed to comply with his will and he fears that this creation will eventually destroy him. This information was disclosed to him by Meta Knight. Kabu later serves as a helpful ally to Kirby by sending him the Warp Star every time Tiff calls for it.

In the first two of the last five episodes, it is revealed that Kabu isn't just a prophet and a provider of Kirby's Warp Star, but is also a shelter acting as a hospital for Warp Stars and wounded Star Warriors. It is also revealed that there is more than one Kabu; they are spread across the universe, with jobs of protecting Star Warriors. It's also interesting to note that the inside of Kabu is like a small ancient chamber with a pedestal that the Warp Star fits perfectly in.

Kabu's appearance is similar to the Moai statues on Easter Island, and he is far larger than the Kabu in the games. In addition, Kabu is not an enemy of Kirby's unlike in the games.

Kabu's name most likely comes from the word kabuto, a type of helmet. It may also be a play on the word kaburi (頭 head). 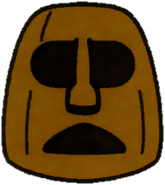 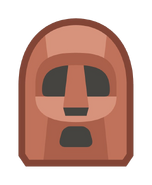 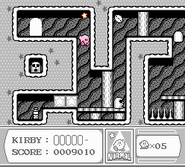 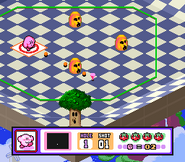 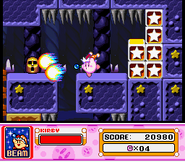 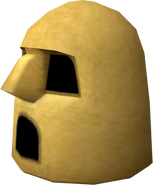 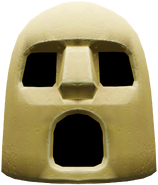