16 HP
Jungle Bomb is an enemy in the Kirby series, debuting in Kirby Super Star.

Jungle Bomb is a pineapple-like foe. He wears a green helmet with four light green leaves sticking out of it. He has small gray feet and two little eyes. As a color swap, Jungle Bomb's helmet and leaves are gray and his feet are brown. When he launches a bomb, he reveals his yellow, pineapple-like insides.

Upon setting his sights on Kirby, Jungle Bomb hops about in place and splits himself open and throws a bomb at Kirby. He may also set a bomb near Kirby, and then quickly retreats to safety and leaves Kirby open for an attack. Occasionally, he may also fling out a barrage of bombs at Kirby if he's close enough. If Kirby inhales Jungle Bomb, he gets the Bomb Copy Ability. He is weak to the Blizzard element and the Cut property. 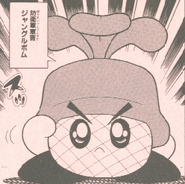 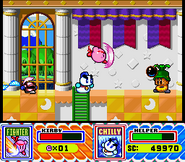 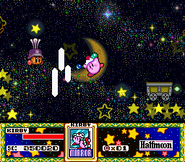