Jumper Shoot is based on the Japanese mythical yōkai creature Kasa-obake. It looks like an umbrella with one large eye, a mouth with stuck-out tongue, a single foot, and wearing a Japanese wooden sandal known as geta.

Jumper Shoot jumps around the screen and uses two attacks. It spins about the screen with its top open and kicks its geta at Kirby. The geta remains on the ground if it misses. The only way Kirby can defeat it without using a Copy Ability is to inhale the geta and spit it at the mid-boss. Because Jumper Shoot randomly chooses between the two attacks and can survive multiple hits, the fight can potentially last a long time.

Jumper Shoot's name is a portmanteau of jump, describing its behavior, and bumbershoot, a word for umbrella. 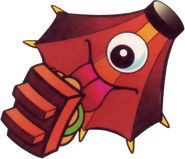