Juckle is an enemy in the Kirby series, debuting in Kirby's Return to Dream Land. It yields the Cutter ability when inhaled.

Juckle is a disk-like creature. It is bright yellow with large eyes on the sides of its body. Juckle has a blue upper section and features a bulbous red nose. When idle, Juckle stores a cutter inside of its body, and the ends of the blade poke out, making it resemble fins.

Juckle first appears in Nutty Noon. The enemy floats in place in midair. When Kirby approaches, it flings a cutter at him. Juckle's cutters can only go in one direction at a time, without returning, and can be thrown diagonally as well. Juckles often appear in groups, and their flying cutters can pose a hazard for any players traversing the level through the air. 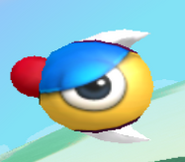