Joe is an enemy in the Kirby series, debuting in Kirby's Dream Land 3. It gives no Copy Ability when inhaled.

Joe resembles a great white shark with a propeller at the end of his tail. His eyes are displayed with a bored expression and has gray pupils. Like real life sharks, Joe has a dorsal fin on his back and two pectoral fins. His mouth is a crescent shape and has four visible sharp teeth.

Joe only appears in Kirby's Dream Land 3. It is often found underwater, where it will home in on Kirby in an attempt to bite him.

Joe is an ally of Kirby in the anime. He often cruises around the oceans of Planet Popstar, waiting for anyone hopeless and unlucky enough to fall into his waters. He looks unfriendly, but Joe is a friend of Kine's and can be a big help at times, seeing as how his favorite foods seem to be penguins and snails - in this case, King Dedede and Escargoon. There is more than one Joe; in the episode Island of the Lost Warrior, after Tornado Kirby blows the king and his servant snail into the ocean, a whole school of Joes appears and chases after them.

A toy that looks not unlike Joe appears briefly in the episode, A Trashy Tale. He is seen among the the trash piles in Chief Bookem and Buttercup's house.

In the anime, he appears much larger than how he appears in the games. He is also colored gray and has a lot more teeth in the anime. 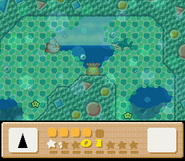