Jet plane helmet with a large jet engine on the back

With this ability, Kirby wears a hat with jet-plane wings, a big jet rocket attached on the back, and some shades on the front that drop down to protect his eyes. He uses this ability to hover for a long time and uses jet-fueled tackles to destroy enemies. This ability also appeared in Kirby Super Star’s Gourmet Race sub-game in the Onion Garden course. It can only be obtained through the third copy pedestal towards the start of the level.

Jet also appears as a Mode for Robobot Armor in Kirby: Planet Robobot.

Jet Kirby in the anime looks the same as the game version, and can move faster than the speed of sound,making it his fastest ability. The only attack he is shown using is 'Jet Cracker'.

Jet is obtained once when Kirby inhales a bike's exhaust port, and another time when he inhales part of a hot air balloon. 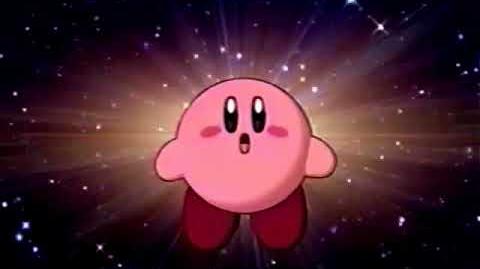 During the transformation sequence, a jet pack dashes past Kirby, spinning him. It about-turns in the background and chases Kirby, whom is panicking. As it collides into him, it attaches to his back and a pair of shades flip down.

Waku Waku Works
Add a photo to this gallery

Retrieved from "https://kirby.fandom.com/wiki/Jet?oldid=338178"
Community content is available under CC-BY-SA unless otherwise noted.