50 HP
Javelin Knight is an enemy in the Kirby series, debuting in Kirby's Adventure. It grants no Copy Ability when inhaled. Javelin Knight is a member of the Meta-Knights, and serves under Meta Knight himself.

Javelin Knight is a mechanical enemy that resembles a red (originally purple) and blue droid. It has a round body, with four spherical appendages rotating around its lower body. In the middle of its face is a slit, where what looks to be its eye can be seen.

Javelin Knight appears alongside the other Meta-Knights as a recurring mid-boss. Once Kirby enters the room, Meta Knight gives the command before leaving, and the enemies appear. Javelin Knight's behavior differs from the others, as it hops around the room, firing a javelin every once in a while. Occasionally, once it spawns, it will glide around the room, dangerously swinging a javelin around at a quick pace. As it does this, it is more difficult to attack it with a close range attack, and Kirby is most likely to get hurt.

Javelin Knight sports the same appearance and behavior as previously, though it appears at will, not requiring the command of Meta Knight. Additionally, its javelin swing has it open up the segment between its head and body, swinging more javelins around at once. It can also be summoned by Galacta Knight, sporting a more ghastly color scheme. It is weak to the Zap element.

Javelin Knight makes two appearances in Kirby Mass Attack. Its first appearance is in the Strato Patrol EOS sub-game. It appears alongside Mace Knight when the Halberd flies in. It attacks by charging up and firing a barrage of javelins in a straight line in front of it. It secondly appears alongside the other Meta-Knights in the Kirby Quest sub-game in Chapter 3.

In Meta Knightmare Returns, Meta Knight can call upon Javelin Knight, along with the other the original Meta-Knights from Kirby's Adventure, to perform his strongest special attack, Meta Knightmares, in which they slash through any and all enemies on screen with their respective weapon. Javelin Knight also appears celebrating in the sub-game's ending. 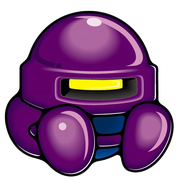 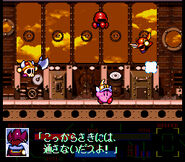