Inhale is Kirby's signature technique. It involves Kirby sucking objects into his mouth like a vacuum, which stretches to fit large objects. Kirby can then swallow the object or enemy that is in his mouth to eat it, or spit it out as a star to attack. In most games, stars will sink in water (though in Kirby & The Amazing Mirror, Kirby: Squeak Squad, and Kirby's Return to Dream Land, they will travel straight through water without sinking).

Many enemy characters have special powers that Kirby is able to copy once he's eaten them, known as Copy Abilities.

Inhaling has no effect on excessively large or heavy objects, such as a boss.

If Kirby inhales for extended periods of time in Kirby: Right Back at Ya!, he becomes exhausted, resulting in panting. This also happens in Kirby & The Amazing Mirror and Kirby: Squeak Squad.

Inhale is a great defense as well as an attack, although it's impossible for Kirby to use while in yarn form in Kirby's Epic Yarn as the air inhaled goes right through his body.

Kirby cannot usually inhale underwater without the help of Kine, although he can in Kirby 64: The Crystal Shards. He can also move while inhaling in that game, something that is impossible in other games.

In Kirby & The Amazing Mirror and Kirby: Squeak Squad, Kirby can only inhale for a certain amount of time—but after inhaling for a while, it becomes a Super Inhale, which has slightly more range and strength, allowing him to inhale Large Enemies, Large Star Blocks, and Heave Ho Blocks.

In Kirby's Return to Dream Land and the New Challenge Stages in Kirby's Dream Collection: Special Edition, the Super Inhale becomes even more powerful. Kirby performs it if, while holding button 1, the player shakes the Wii Remote or presses the buttons on the Wii Remote's +Control Pad repeatedly. It has further range, and allows Kirby to inhale the Heave Ho Blocks instead of moving them, as well as all enemies, 1UPs, food, and even other players, and spit them out as a star; how large the star is depends on how many objects Kirby inhaled. Very large stars roll through enemies and only stop when they hit a wall.

Kirby: Triple Deluxe returns to the method seen in Kirby & The Amazing Mirror and Kirby: Squeak Squad, although he can Super Inhale indefinitely, similarly to Kirby's Return to Dream Land. However, it barely increases in range and doesn't have a noticeable impact in terms of power.

Inhale is Kirby's and King Dedede's standard special move in the Super Smash Bros. series, working much the same as it does in their own games. Kirby sucks up his foes, after which he can then spit out or swallow them. If he spits out an enemy, he/she will turn into a star (temporarily) that can be used to hurt others. King Dedede can suck in foes and also shoot them out, but can't swallow or copy abilities. His stars are more powerful though and his inhale has greater range.

Though Kirby can't defeat other characters directly by swallowing them, he can still copy their abilities and gains the use of that opponent's standard special move, along with a hat that makes him look like that character (for example: inhaling Mario allows Kirby to use his Fireball attack and has him wear Mario's hat). Any ability that Kirby copies will be weaker in magnitude from the original move, however. The powers Kirby gets are dependent on Super Smash Bros. Abilities. However, in the Subspace Emissary, standard enemies cannot be inhaled.

In Super Smash Bros. for Nintendo 3DS and Wii U, Kirby can change his Inhale using custom moves. Kirby can now also use Ice Breath or Jumping Inhale. Ice Breath involves Kirby freezing enemies that come in contact with his icy breath. Jumping Inhale allows Kirby to inhale while lunging forward. However, exhaling a star won't deal damage. King Dedede can now also use Dedede Storm or Taste Test. Dedede Storm is an inhale that does repeated damage before launching opponents. Taste Test is a quick inhale that spits out opponents instantly. 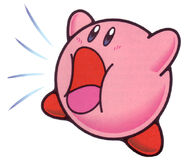 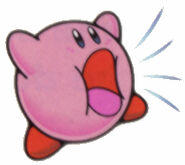 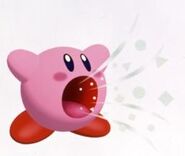 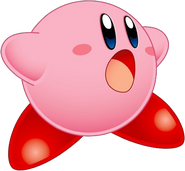 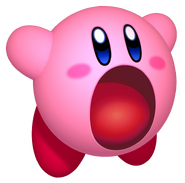 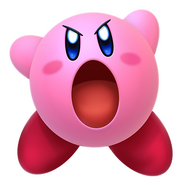 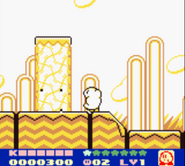 Super Smash Bros. for Wii U
Add a photo to this gallery
Retrieved from "https://kirby.fandom.com/wiki/Inhale?oldid=220274"
Community content is available under CC-BY-SA unless otherwise noted.