Ice Island is a quaint little place located in Dream Land that is full of frost and mountains. It is always subject to small snow showers and flurries. Like other frozen areas of Dream Land, Kirby can see the vast galaxy and shimmering aurora here. Here, Kirby ventures through snowy fields, a conifer forest, icy mountains, and even a tower made of ice (much like Peppermint Palace of the mirror world). Ice Island is also home to the Squeaks' hideout. As with the other ice-based levels in the series, Kirby must tread carefully because of the lack of traction on the ice. Kirby faces off against one of the game's two main antagonists, Daroach, as well as the rest of the Squeaks here.

If Kirby obtains Bomb's and Sword's Ability Scrolls, he can mix the following abilities: 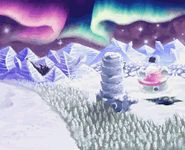 Animal Kirby digs through a mass of pale white snow.

Kirby in the quiet forest of Ice Island.

Kirby within a cave in the frigid area.

Tornado Kirby uses his power to its full extent by tapping into the icy ground.

Kirby uses his Fire ability to break the ice.

Inside a cavern filled to the brim with ice crystals and running water.

Kirby solves a minor puzzle to get a Treasure Chest.
Deutsch 日本語 中文
Community content is available under CC-BY-SA unless otherwise noted.
Advertisement