Ice Cream Island is the second level in Kirby's Adventure and its remake. It comes after Vegetable Valley and before Butter Building.

Kirby is sitting on the beach, wearing sunglasses and daydreaming about various snack foods. A Waddle Doo with a hammer suddenly appears in Kirby's thought bubble and hits him on the head and knocks his sunglasses off. Kirby falls out of his lounge chair and looks around in a confused, surprised, and worried manner.

Ice Cream Island consists of five normal stages. It is a tropical, sunny, paradise. The level is filled with sandy beaches, coastal forests, exotic flowers, explosive coconuts, and palm trees. The majority of the parts of Ice Cream Island that Kirby travels through is covered by shallow waters and overlooks a large ocean. Kirby also traverses a vast desert-sized beach, an underground cave, and even ventures into the clouds in this level. Taking place near the bay, many of the enemies in Ice Cream Island are aquatic enemies and can survive in the water. The boss of Ice Cream Island, Paint Roller, is fought inside a large castle, but Kirby is only able to explore one room of it. 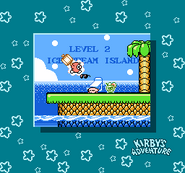 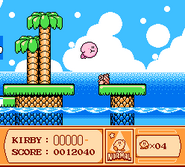 The first encounter with Meta Knight's minions, the Meta-Knights (remake).

A chain of the islands and the surrounding seas (remake)