A crown of ice crystals surrounded by a circlet or visor with either a blue gem or an orange gem in its center. Sometimes has light-blue tinted skin.

Ice is one of Kirby's Copy abilities. It is a very basic ability that displays freezing properties. It parallels the Fire ability.

Ice's main function is to unleash a wintery breath of ice, turning any enemy it touches into an ice cube. After that, Kirby is able to kick the frozen enemy forward into other enemies or obstacles. If the icy block isn't kicked shortly after it materializes, it automatically explodes. Rather than running, Kirby sometimes calmly ice-skates through the level, making it easier for him to kick his frostbitten foes along.

The Ice ability has two extensions, both of which are derived from properties of said ability. These are the Freeze and the Ice Skating abilities.

Ice Kirby in the anime uses a slightly different hat design from the games with a six pointed blue gem and small visor at the front. His skin turns blue, as it does in Kirby Super Star. He can breathe icy wind at his enemy to freeze them, and naturally it's not very useful against an ice-based foe, like Ice Dragon unless it's an "inside" job, but can use the Freezer Suction/Ejection and Ice Kick on non-ice foes.

In the transformation sequence, a chill wind makes Kirby shiver and turn blue before his crown of ice crystals sprouts from his head and wears a visor crown. 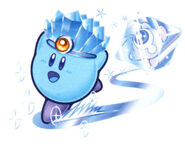 Kirby and the Amazing Mirror

Kirby Squeak Squad
Add a photo to this gallery
Retrieved from "https://kirby.fandom.com/wiki/Ice?oldid=69738"
Community content is available under CC-BY-SA unless otherwise noted.