I³ is an enemy that appears in Kirby 64: The Crystal Shards. It grants no Copy Ability, as it cannot be inhaled.

I³ is a big, green, blocky, boulder-like creature that has a single eye. Its pupil is black.

I³ makes its debut in this game. It drops from the sky when Kirby approaches in an attempt to crush him. After it lands, it will then rise back up and stay up for a while, giving Kirby time to get by. It is invincible, like other obstacle enemies. I³ can often be found in a spot where there is little room below it, making it harder to get past. However, its predictability makes up for the difficulty of the enclosed space.

I³ makes an appearance as one of the paintings Adeleine can make in Kirby Star Allies. It rises up and drops down, crushing anything below it.

Its Japanese name, ドネン (Donen), comes from the Japanese onomatopoeia for thud, ドン/どん (don). It may also be an anagram of the word for clay, 粘土/ねんど (nendo). 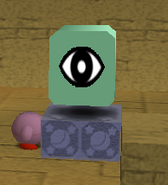 Kirby 64: The Crystal Shards
Add a photo to this gallery
Retrieved from "https://kirby.fandom.com/wiki/I³?oldid=340602"
Community content is available under CC-BY-SA unless otherwise noted.