Hypernova Yourself is a photograph editor. After uploading a photo (through a file upload or webcam) and placing it in the frame, the player is able to apply various effects to it. The photo is warped in the middle, has swirling wind patterns placed over it, and is set atop a rainbow background. One of three frames—a starry blue border, a dotted flower border, and a white star cluster—can be placed on the photo. Stamps can be added, and each piece can be rotated and resized. The stamp categories include:

Buttons below the tools and photo serve to ease the player's creation. The ? tab brings up short instructions. Clear deletes all added effects. The back arrow deletes the photo and effects; as a safeguard, it requires two clicks to be performed. Surprise me! places random effects.

When the player is content with his/her creation, the final button comes into play. Save! allows him/her to download the finished picture. The player is then prompted to share the image with others and play again. A Start Again button then appears. 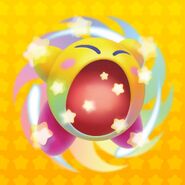 The player adds a border to the picture.

The player adds stamps to the picture.

The player is finished.