Kirby glows the colors of the rainbow, and his eyes become a darker shade of blue.

Hypernova is a Copy Ability introduced in Kirby: Triple Deluxe. Obtained by eating a Miracle Fruit, it causes Kirby to undergo a temporary transformation that amplifies the power of his inhale enormously, allowing him to inhale larger objects and enemies that cannot be inhaled otherwise. Throughout the game, Hypernova is used to defeat certain foes, solve puzzles, and in some stages, completely inhale mid-bosses.

Unlike most other abilities, Hypernova does not give Kirby a unique hat or wearable object but instead causes him to glow an assortment of colors in the rainbow spectrum; these colors are shown to constantly move around his body, even when he is standing still.

Hypernova appears only in the main game, where it can be found in two or more stages per level. It is used up to the last stage, where it is used to combat Queen Sectonia during her third and final comeback.

Hypernova is an occurrence when a sufficiently massive star collapses; this type of collapse usually produces a black hole.

Its Japanese name, ビッグバン (Biggu Ban), is named after the theory stating that the universe was created by a massive explosion known as the Big Bang. 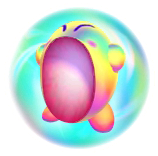