City Trial (must be unlocked for Free Run; available in regular City Trial after finding all pieces in boxes)

Unlock Hydra Parts X, Y, and Z on the Checklist

The Hydra is a Legendary Air Ride Machine that appears in Kirby Air Ride. It can only be unlocked in City Trial. The player must either get all three parts from Red Boxes to ride it temporarily, or unlock all three parts on the Checklist to ride it in Free Run. It has very good turning, a fair glide, and high attack power that can defeat most other Air Ride Machines in one hit. It is one of the "legendary" stars (along with the Dragoon), and is one of the hardest stars to unlock. It possesses extremely high stats, surpassing the Dragoon in most areas except for handling and gliding, but its charging abilities are among the worst in the game. Similar to the Bulk Star, this star runs on "fuel" from charging (which takes a large amount of time). After a full charge, the Hydra will go at reckless speeds. It's an ideal vehicle for medium-length tracks, as the charge time will take too long in short tracks, and will take its toll on the user if the race is too long. If the spin attack is used in close range of an enemy, the Hydra will perform a ramming attack instead of a spin.

The Hydra's appearance is based on the rhinoceros beetle, an insect known for its strength. In fact, the Hydra is so powerful that at full speed, it can destroy most Air Ride Machines in one hit simply by ramming into them; the only Air Ride Machine that cannot be destroyed in one hit is the Wagon Star.

The Hydra appears as a collectible trophy in Super Smash Bros. Brawl. It can be found in Coin Launcher, Subspace Emissary, or Boss Battles.

"Hydra" is likely derived from the monster in Greek mythology of the same name, a multi-headed snake monster whose heads duplicated when cut off. This reference likely serves to emphasize the Hydra's enormous attack power and practical invincibility.

Kirby Battle Royale (Headgear)
Add a photo to this gallery 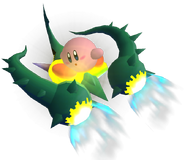 Kirby Super Star Ultra (Treasure)
Add a photo to this gallery
Retrieved from "https://kirby.fandom.com/wiki/Hydra?oldid=324346"
Community content is available under CC-BY-SA unless otherwise noted.