Hunter Scarfy is an enemy in the Kirby series, debuting in Kirby's Return to Dream Land. It cannot be inhaled.

Hunter Scarfy's appearance is nearly identical to Scarfy with the only difference being that its body is a salmon color. Its Mutant form is bright red.

Hunter Scarfy guards a key. Like its regular orange cousin, it cannot be inhaled. However, Hunter Scarfy will not transform into its mutant form when Kirby attempts to inhale it. Instead, it transforms when Kirby or one of his friends grabs its key. Hunter Scarfy will chase him until he drops it or uses it to open a door. After the latter happens, the enemy returns to its normal state. Unlike regular Scarfys, it will not explode if it touches a player. In Extra Mode, more Hunter Scarfys appear than in the Main Mode, to increase the difficulty of the game.

Like ordinary Scarfys, Hunter Scarfys can chase Kirby from the background to the foreground (or vice-versa) if he switches planes with a 3D Warp Star. 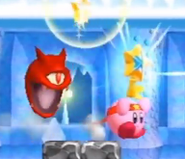 Kirby: Triple Deluxe
Add a photo to this gallery
Retrieved from "https://kirby.fandom.com/wiki/Hunter_Scarfy?oldid=333707"
Community content is available under CC-BY-SA unless otherwise noted.