Huge Flotzo is a large enemy in the Kirby series, debuting in Kirby's Return to Dream Land. It cannot be inhaled.

Huge Flotzo is a giant pale octopus with eight stubby tentacles. It has two red eyes spaced far apart with a huge pair of pink lips between them. A purplish spot and a flashing star can be seen above the creature's right eye. The octopus holds a sunken ship over its body. The ship is old, gray, and barnacle-encrusted; it has tattered sails, four portholes, an anchor, and a mast.

Huge Flotzo appears in Stage 3 of Onion Ocean. It can be found at the end of the stage. When Kirby approaches it, the creature covers itself with a wrecked ship; it occasionally lifts the wreck for a second to peek out. Kirby takes damage if he touches it.

Huge Flotzo is immune to all but one ability: Monster Flame. Kirby cannot defeat the leviathan when it is covered by the ship, so he must let loose his attack when the octopus lifts it. When hit, the creature tosses the shipwreck up and bursts into blue flames. It then disintegrates into a lump of ash, and a dimensional rift appears in its place. 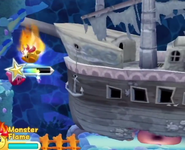