Bugzzy
The Flame Planet Hotbeat is the scorching star in Milky Way Wishes, resembling a sun. Hotbeat is considered the fourth planet, following Skyhigh and preceding Cavius. It contains more magma and lava than anywhere else in Kirby Super Star, with most of the planet's surface being lava. It is divided into three main areas, the first being a small tunnel in which Kirby must worm through without being burned, a more open area that can be easily passed with the mine carts provided, and a cramped space taken up mostly by cannons. 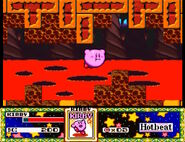