Hot Head is a recurring enemy in the Kirby series. Kirby can get the Fire ability by inhaling him.

Hot Head is notable for being one of the first few enemies Kirby often comes across in the beginnings of many of his journeys alongside Sir Kibble, Sparky, and Waddle Doo.

Hot Head is a peculiar orange creature with a small trunk which it can use to blow out a stream of fire. His feet are a shade of orange slightly lighter than the rest of its body. His back is always covered in coalescent flames.

In all appearances prior to Kirby: Nightmare in Dream Land, Hot Head's back wasn't covered in flames. Instead, his back is pale yellow with small tentacle-like protrusions coming from it and two large flipper-shaped horns. His face retains the trunk, but it is dark orange instead of the lighter hue used in later games. A similar design was used in Kirby and the Rainbow Curse.

This was Hot Head's first appearance. He merely walks around occasionally stopping to blow a flurry of fire at Kirby if he is within range. If he is at a distance, Hot Head spit will spit a fire ball towards him instead. This behavior was used in every following game, but is notably hazardous in this game, as Hot Head can shoot Kirby with a fireball as soon as he enters a door, which can catch the player off guard due to its fast speed. If Kirby is set ablaze by the fireball, he is also extremely vulnerable, especially if a bottomless pit is nearby. Hot Head is a major threat in Orange Ocean's first stage along with Sparky and Flamer. He is also the only enemy that grants Kirby the basic Fire ability upon inhalation, whereas the other fire-based enemy (Flamer) gives Burning.

Hot Head is exactly the same in the remake. However, its newer, more fiery design is used.

Hot Head's behavior is no different from its earlier appearances. In Kirby & The Amazing Mirror, his fireballs are still fast, but he is slightly more patient in this game, giving more of a chance for Kirby to defeat him or avoid his fire blow attack. Kirby: Squeak Squad introduces the Bubble Head species, which is virtually the Bubble equivalent of Hot Head, and Acchi, a larger and stronger creature that acts similarly to Hot Head.

Super Hot Head, a Super Ability-yielding enemy, is introduced in Kirby's Return to Dream Land; normal Hot Head also appears in the game. Besides the main game, he appears in the Whip and Water Challenges on the Lor Starcutter. He appears in the New Challenge Stages in Kirby's Dream Collection Special Edition as well, specifically in the Smash Combat Chamber and Magolor Race 1.

Hot Head exhibits its usual behavior. This time, however, he can spit fireballs from one plane to another.

Hot Head does not move about or shoot fireballs. He simply stands in one location and spits a long jet of flame, which Elline can block with rainbow ropes.

When Phan Phan escapes, the N.M.E. Sales Guy turns to Dedede to help return him. Dedede is angry at him, and tells him that he should be ashamed for letting him escape. However, NME Salesman says that he wasn't in his care at the time. He goes on to explain that he was at the "Monster Training School." Hot Head is one of the few monsters to be shown in the training school. He, along with Poppy Bros. Jr., is a member of the Snow Class, which is the strongest of the whole school. He is shown bouncing a small pink basketball on his head. It is not known what becomes of Hot Head after eNeMeE is destroyed, neither is it known if he even finishes training school and becomes a full-fledged monster by the end of the series.

Unlike many of the other characters of the anime, Hot Head is shown with his original design, even after his appearance was changed in Kirby: Nightmare in Dream Land. Rather, Hot Head appears exactly as it does in its Kirby's Adventure artwork.

In Super Smash Bros. Brawl, Hot Head appears as a sticker, using his artwork from Kirby: Squeak Squad. Usable only by characters of the Kirby series, this sticker increases Flame Attack by 10. 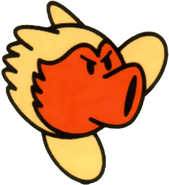 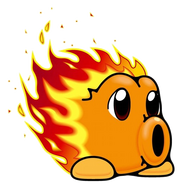 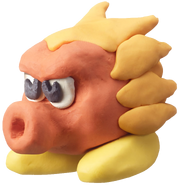 Kirby 25th anniversary artwork
Add a photo to this gallery 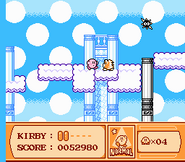 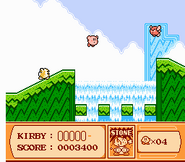 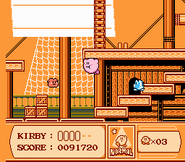 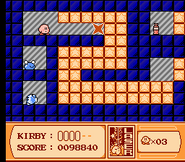 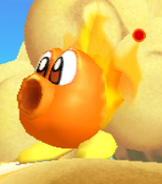 Kirby Mass Attack
Add a photo to this gallery
Retrieved from "https://kirby.fandom.com/wiki/Hot_Head?oldid=320382"
Community content is available under CC-BY-SA unless otherwise noted.