Hooplagoon is a boss in the Kirby series, debuting in Kirby and the Rainbow Curse.

Hooplagoon is a large, round, brown, robotic being. He has squinting eyes with tiny pupils. His face is adorned with ornate yellow lines. Surrounding the boss's main body are four armor plates: three are orange while one is made of cracked metal. Extending from the spaces between the plates are four turquoise cones—laser cannons—that can retract inward. Beneath the boss's armor are gears that enable his movement. His back is adorned with a facial pattern.

Hooplagoon reappears later in Orange Woodland with a slightly different design. He sports a magenta and orange color scheme. The boss also wears diving goggles and a snorkel.

Hooplagoon is first fought in the stage Hooplagoon, Relic of the Ruins. After emerging from the back wall, he begins slowly bouncing around the room, his body rotating all the while. he fires a laser from the only cone extending from his body; Elline can block this laser by drawing rainbow ropes. Kirby can damage the boss by Tap Dashing or Star Dashing into one of his armor plates, destroying it. This will cause Hooplagoon to grow in size and drop Point Stars. He then continues his strategy. His armor now requires two Tap Dashes or one Star Dash to break.

After the second plate is destroyed, Hooplagoon drops more Point Stars—some of which are 10-Stars—and grows larger. His strategy then changes: The boss now projects an electrical shield around himself and moves around the room in a rectangular motion. He then extends two cones and fires lasers while still moving. His armor now requires three Tap Dashes or one Star Dash to break. Hooplagoon turns red and grows to his largest possible size, then angrily continues his strategy. Every time he touches a corner of the arena, Point Stars drop from the ceiling. After his electrical barrier wears off, he extends all four cones and fires lasers.

In order to break Hooplagoon's metal plate, the player must collect 100 Point Stars (or use the Kirby amiibo figure) and Star Dash into it. The boss will then explode.

Hooplagoon surrounds himself with an electric barrier.

Hooplagoon is fought for a second time in the stage Hooplagoon of the Lake. This battle is mostly the same as the one in Yellow Dunes, but with a few key differences. The fight takes place completely underwater, so Kirby automatically rises toward the ceiling if left idle. Before Kirby breaks Hooplagoon's first armor plate, the boss moves much quicker. After the second plate is destroyed, a current forms to push Kirby around in a clockwise direction. Hooplagoon also knocks Point Stars out of the ceiling at his second largest size as well.

Hooplagoon's name may be a portmanteau of "hoopla," a word referring to boisterous commotion and excitement that contains the word "hoop," referencing his round, spinning shape; and "goon," a reference to the boss's villainous nature.

His Japanese name, バウンドグーン (Baundogūn), appears to be a compound of "bound" (バウンド baundo), referencing his bouncing nature; and "goon" (グーン gūn), referencing his antagonistic nature. However, the name also phonetically contains the Japanese word for a clay figure, dogū (ドグー dogū), referencing his status as a clay being, and how his eyes greatly resemble those of dogū figures from the ancient Jōmon period of Japanese history (in particular, the iconic goggle-eyed Shakōkidogū). This connection is reinforced by his figurine description, which says that Claycia used blueprints and clay from an ancient time to sculpt Hooplagoon.

Hooplagoon is defeated in Yellow Dunes.

Hooplagoon is defeated in Orange Woodland. 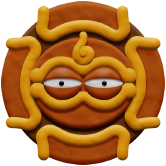 Kirby and the Rainbow Curse
日本語
Community content is available under CC-BY-SA unless otherwise noted.
Advertisement