Hi-Jump is a Copy Ability in the Kirby series, debuting in Kirby's Adventure.

Hi-Jump focuses on jumping to deal damage; this does not affect Kirby's innate jumping ability, instead being used as his attacking move. Since Hi-Jump focuses on ramming into enemies, it uses invincibility to prevent from taking damage itself. Hi-Jump is obtained from the Starman enemy.

Hi-Jump allows Kirby to perform a a jump with very similar properties to a fully-charged fly shot. This can be performed from a grounded shot so that Kirby can jump after rolling within the same shot, or can be performed from a fly shot to jump even higher than before. Regardless of which shot type, Hi-Jump can be used to go over any traps or tricks on the course; as such, Starman is usually placed in holes where this jump would be desirable. Hi-Jump can backfire if not used properly, however, potentially causing Kirby to overshoot the intended position or go OB, losing a life (or two health in the case of multiplayer) and the Copy Ability in the process.

On the ground, Hi-Jump causes the player to travel 6 tiles in the direction Kirby is facing (assuming Kirby is looking in the 45° diagonals, as looking directly vertically or horizontally has Kirby travel along tile diagonals, which would be roughly 4.24 tile diagonals) before touching the ground and bouncing again. On either the ground or in the air, Hi-Jump causes Kirby's height to increase by 5.5 tiles at its peak. Hi-Jump also cancels any momentum Kirby has, so its trajectory will always be the same, as opposed to going less distance if Kirby is traveling slowly or more distance is Kirby is traveling quickly.

In multiplayer, the Transformer has the potential to give the player Hi-Jump.

Hi-Jump is mostly unchanged from its appearance in Kirby: Nightmare in Dream Land. The move can no longer be canceled, either by the ceiling or by pressing the B button during the jump, but instead it can be used anywhere. Hi-Jump now hits multiple times instead of just once, and it has more maneuverability than before; it can also hit enemies and objects adjacent to it instead of only those directly in its path. Upon obtaining the Hi-Jump Ability Scroll, located in the 2nd Treasure Chest in Stage 4 of Cushy Cloud, Hi-Jump can now break Metal Blocks. Hi-Jump is obtained from Starman.

Hi-Jump can now charge up its Hi-Jump up to three levels of charge; it can also perform a diving move in the air. While Hi-Jump can be performed anywhere, it now only hits once. Hi-Jump is obtained from Starman.

A Hi-Jump Challenge can be unlocked by collecting 35 Energy Spheres, and Hi-Jump can be accessed from the third Copy Ability Room for 60 Energy Spheres. 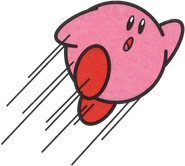 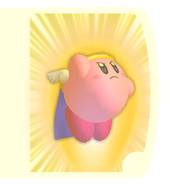 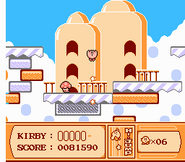