The heroic heart is the name of the star that popped out of Kirby when he was split into ten by Necrodeus' scepter during the events of Kirby Mass Attack.

The heroic heart is a star-shaped object which glitters permanently with blue-white light. How bright it glitters depends on how urgent the action is - for example, if the player taps repeatedly on the screen, the heart will glow brightly and the Kirbys dash instead of walking towards it.

As the heroic heart's name suggests, it is Kirby's own heart. The heart is seen communicating its thoughts with the remaining Kirby after his first encounter with Necrodeus - it is likely that Kirby has to make conscious effort to follow its direction simply because he has been separated from it. Should all the Kirbys be KO'd in a stage, the heroic heart disappears, and the game ends with a lone gray-angel Kirby floating in the air.

Kirby Mass Attack is the first time where Kirby loses his heart after being split into multiple Kirbys, although such separation has happened previously in Kirby & The Amazing Mirror and in the Kirby: Right Back at Ya! episode The Fofa Factor. 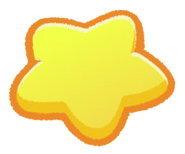 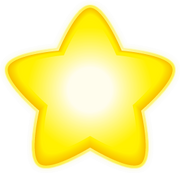 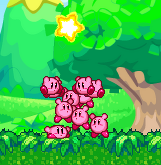 Retrieved from "https://kirby.fandom.com/wiki/Heroic_heart?oldid=317156"
Community content is available under CC-BY-SA unless otherwise noted.