Helpers (sometimes referred to as Friend Helpers or just Friends) are characters that appear in Kirby Super Star, its remake, and Kirby Star Allies. They physically appear to be regular enemies (and occasionally mid-bosses) that have different color palettes than their enemy equivalents and are summoned by Kirby to help him instead of hurt him. By sacrificing his ability, Kirby can create a Helper. However, in Kirby Star Allies, Kirby instead will throw a Friend Heart at an enemy to create a friend. Helpers are normally CPU-controlled, but can also be controlled by another player. Each Copy Ability has a corresponding Helper, excluding limited-use abilities (with the exception of Cook in Kirby Star Allies). If the player wants to change out the Helper for another one, an Ability Item representing Kirby's current ability can be thrown to it. Upon touching the item, the Helper will change to the character that corresponds to the ability represented by the item.

Using the Normal Beam on a Helper will call it back, transforming it into its respective Ability Item.

If a Helper is far behind behind Kirby, said Helper will use a Space Jump to teleport to Kirby. This phenomenon can also be triggered manually. This mechanic can also be used in other games like Kirby's Dream Land 3.

Unlike Kirby, Helpers can repeatedly jump in midair, and so do not have to inflate themselves to fly. Some Helpers, such as Birdon and Capsule J/Capsule J2, have an improved ability to fly. This allows Helpers to attack in midair, as they do not have to spit out air beforehand.

In Kirby Super Star Ultra, Helpers have a significant role in Helper to Hero, a sub-game where both the first and second players can play as a Helper with the goal of defeating a series of bosses, thus proving the Helper to be a true hero rather than just a side character. Kirby Star Allies has a similar mode called Guest Star ???? Star Allies Go! where players can control Friends and Dream Friends, but instead of battling a series of bosses, players have to traverse all five worlds as a Friend.

The roster of Helpers is identical in both Kirby Super Star and its remake, with the exception of Capsule J, who was replaced by Capsule J2 in the remake, and Sword Knight, who was added in Meta Knightmare Ultra. When a helper is present, boss HP is increased by 30%. Helpers with alternate colors appear in Helper to Hero as well.

Helpers were slated to appear in the cancelled Kirby GCN. In this game, up to three Helpers could be created at once. They could then be controlled by up to three players or by the computer. A stacking system had been revealed in which Kirby and his Helpers could ride on each other's backs (possibly creating new attacks). Looking at screenshots, it is discernible that the Helpers created by the player would have been yellow, green, or blue color variations of their respective enemies. These color variations would have denoted different players. Presumably, yellow denoted Player 2, blue denoted Player 3, and green denoted Player 4. These exact colors were later used to denote the respective Helpers in Kirby Star Allies. New Helpers which do not have confirmed names due to the game's cancellation would have appeared as well.

Helpers make a reappearance in Kirby Star Allies, where they are referred to as friends. Unlike in Kirby Super Star and Kirby Super Star Ultra, Kirby can summon up to three friends instead of one. This is done by having Kirby throw a heart at an enemy that grants a Copy Ability, as opposed to forfeiting his current ability in favor of creating the friend; friends also now wear Kirby's Copy Ability hats and use the weapons associated with their Copy Ability. They also take on different color schemes to represent which player they are: Yellow for Player 2, Blue for Player 3, and Green for Player 4. If Kirby wants to be rid of a friend, Kirby can either unfriend them or inhale and swallow them, gaining their respective ability.

Certain doors, marked with friend icons in the game can only be accessed with a certain number of friends.

Special friends, known as Dream Friends, can be accessed by visiting Dream Palaces throughout the game. These include Bandana Waddle Dee, King Dedede, Meta Knight, Rick & Kine & Coo, Marx, Gooey, Daroach, Dark Meta Knight, Adeleine & Ribbon, Magolor, Taranza, Susie, and The Three Mage-Sisters. Rick & Kine & Coo, Marx, and Gooey were available after a free update on March 28, 2018. Daroach, Dark Meta Knight, and Adeleine & Ribbon were added in a second free update which released on July 27, 2018. Magolor, Taranza, Susie and The Three Mage-Sisters were added in a third free update which released on November 30, 2018. 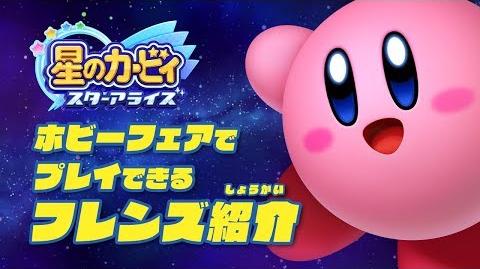 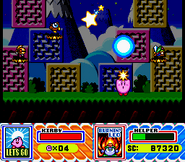 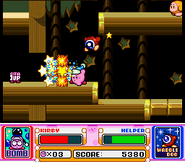 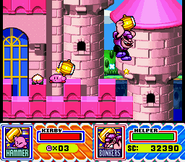 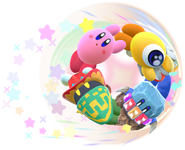