Kirby Wiki
Register
Don't have an account?
Sign In
Advertisement
in: Enemies, Characters, Articles with non-canonical information,
and 7 more
English

Heavy Mole is the boss of Yogurt Yard in Kirby's Adventure and its remake, and is one of the few mechanical bosses in the series. He is a monstrous robotic foe that spends all of his time digging tunnels beneath Dream Land.

Unlike the other bosses from Kirby's Adventure, Heavy Mole doesn't make any form of appearance in the anime. However, there is another monster called Mole that has similar techniques and concept as Heavy Mole.

Heavy Mole, contrary to his name, does not resemble a regular mole. He is a shiny, brass, dome-shaped machine with two bright red retractable saws on the ends of him. He has a single, large eye and his golden, mechanical exterior is covered in gyrating spikes, which he uses to drive through the dirt that he resides in. He is also capable of flying low to the ground. This may be due to the fact that he has two small propellers on his back.

In Kirby's Adventure and its remake, Heavy Mole is entrusted with a piece of the fabled Star Rod when Nightmare invades the Fountain of Dreams. When the battle ensues, Heavy Mole digs through a large sea of dirt and will fire out Drill Balls from behind him that Kirby can then inhale (the yellow ones give Hammer when swallowed, which can destroy the dirt in the battlefield, and the red ones give Sleep when swallowed). During the fight against Heavy Mole, the screen is always scrolling and focuses on him—so if Kirby gets off-screen, he automatically loses a life regardless of his remaining health.

Later on in the series, Heavy Mole appears as one of the challengers faced in Kirby's Avalanche. He is the twelfth impediment in the game, and is faced after Paint Roller and before Mr. Shine & Mr. Bright. His dialogue with Kirby is below.

Heavy Mole's AI is based to be similar to that of Lololo & Lalala's, focusing on bursting more blobs over performing combos. However, he is more rapid at doing so than the aforementioned duo, requiring that Kirby should act fast to overwhelm him with a large combo that will finish him off, as Heavy Mole will often quickly recover from non-game ending combos. As with the stages that takes place at the Dream Fountain at this point, blobs drop at a rapid pace. 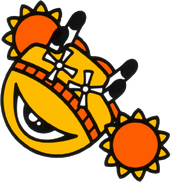 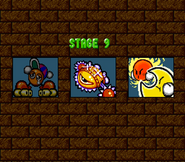 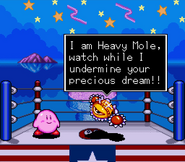 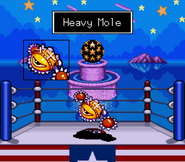