Heavy Lobster is a strong, mechanical, lobster-like enemy who has so far appeared in Kirby Super Star, Kirby Super Star Ultra, Kirby Mass Attack, and also in the anime. It is a large, gold robot lobster that usually serves under Meta Knight. Equipped with flamethrowers in its claws and jets near its feet, Heavy Lobster is one of the most powerful foes Kirby has come across in his journey and is a force to be reckoned with. It is also one of the few providers of the Paint ability.

Heavy Lobster first appears in Revenge of Meta Knight, where he is fought twice throughout the course of the sub-game; the first time is on the engines of the Halberd, which blows Kirby and Heavy Lobster away (the whereabouts of Heavy Lobster after this is unknown). The second time it is fought in the cabins of the ship, where Heavy Lobster chases Kirby through a maze which Kirby must navigate through. When the maze ends, Heavy Lobster jumps up and the chase is turned into the standard boss battle, giving Kirby a chance to counterattack. As with the rest of the sub-game, though, the two battles with Heavy Lobster are timed so Kirby must deal with it quickly. Its attacks range from ramming Kirby, sending out Mini Lobster projectiles, blowing out fire, and jumping in place attempting to stomp on him.

Heavy Lobster may also deploy Paint Slimes. If Kirby eats it, he gets the Paint ability. If he uses Paint, Heavy Lobster will be entirely covered in red paint, thus blinding it and heavily damaging it. When Heavy Lobster goes blind, it will obviously be helpless, move around unpredictably, and attack erratically. In Revenge of Meta Knight, doing this results in humorous dialogue from The Meta-Knights as they are astounded by Kirby's new-found ability and know that Heavy Lobster no longer stands a chance. When defeated in Kirby Super Star Ultra, Heavy Lobster falls into pieces rather than disappearing in an explosion.

Heavy Lobster appears as the penultimate boss in the pinball-based sub-game Kirby Brawlball. Its attacks are slightly modified versions of its attack from the previous game. A Wheelie also appears at the bottom of the arena, darting around and serving as an obstacle.

Heavy Lobster use the same attacks it has previously, but instead of utilizing the fire cannons in its claws, Heavy Lobster shoots out encapsulated bullets that burst into flames when they hit the ground. Heavy Lobster can still releases Mini Lobsters, but he can now fire gold colored missiles in-between sets. It also charges from one side of the screen to the other. Additionally, the Paint Slimes it fires are now oil-colored and will splatter and obscure part of the screen if Kirby hits one, making it tough to see.

Heavy Lobster has a great amount of HP, and it takes a lot of hits to take it down. Heavy Lobster is the fastest foe in the sub-game, and will jet around the arena using its rocket boosters. These fast-paced movements also allow Heavy Lobster to dodge attacks.

Heavy Lobster makes an appearance in the 99th and penultimate episode of Kirby: Right Back at Ya!, Combat Kirby, as the final monster to appear in the anime.

As the Halberd approaches Nightmare's Fortress, Nightmare sends Heavy Lobster to the ship to track down the engine room and rip it apart to destroy the Halberd. When Heavy Lobster goes on a rampage attacking a trio of several Cappies and Kit Cosmos, Meta Knight orders Tiff, Tuff, and Kirby to track it down, and they have a remote that can open and close metal barriers. He also sends Sword and Blade after it, who take with them a rocket launcher. Heavy Lobster is among Nightmare's stronger creations, managing to best Kirby's Cook ability and Sword Knight's rocket launcher without a scratch and destroy the solid metal walls in a few seconds with its energy lasers and beams. As it reaches the engine room, Chef Kawasaki gives Kirby ice cubes, allowing him to become Ice Kirby, who freezes it with his ice breath. While it was frozen, Sword and Blade shoot the rocket launcher at it, destroying it once and for all.

As the name suggests, Heavy Lobster is a large lobster-like robot. Its primary color is bright gold with some white here and there. It has small legs and long feet, and its body is pill-shaped with a jet thrust behind it. It has wing-like appendages on the sides of its head and green colored eyes. It is equipped with two claws and has a furnace-like mouth. It is also shown in the anime that Heavy Lobster makes loud dinosaur-like roars similar to that of the Ice Dragon.

Being the final monster to be sent by Nightmare, Heavy Lobster is one of the strongest monsters in Kirby: Right back at Ya!. It possesses far greater strength then WolfWrath and even Masher 2.0 combined. While it can walk on its own, it is also equipped with jet thrusts to go in high speeds as a means of faster travel, and it has strong armor that is powerful enough to be hit by Sword Knight's rocket launcher three times (one fired directly into its furnace-like mouth) as well as taking a hit from a blast of Cook Kirby and not even getting a scratch. Its primary ability is firing pink energy lasers from its claws; these lasers are very strong and on top of that, each contact that the laser makes will cause huge explosions similar to the Domestic Servant Robot. It can also sometimes fire a blast of small but powerful pink energy bullets, fire large pink energy beams that are powerful enough to melt steel doors, or fire the energy lasers in a spread from its claws.

Heavy Lobster appears as a primary, Advanced-class shield spirit in Super Smash Bros. Ultimate. It sports no effect when applied to a fighter. 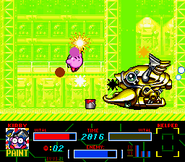 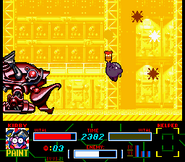 Kirby Mass Attack
Add a photo to this gallery
Retrieved from "https://kirby.fandom.com/wiki/Heavy_Lobster?oldid=321592"
Community content is available under CC-BY-SA unless otherwise noted.