Heavy Knight is a large enemy that appears in several Kirby games. It is a large, heavily armored knight with red metal plating and a spike on its head or helmet. It has a big sword to slice enemies. Its sword is slower than Sword Knight's, but it is also bigger and stronger. Heavy Knight gives Kirby the Sword ability when Super Inhaled.

When Kirby is possessing Heavy Knight as Ghost Kirby, he can use the sword and lunge it forward if the player double-taps the side button on the +Control Pad. Also, because of its heavy armor and slow speed, it is hard to move around. 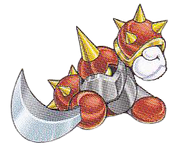