Kirby Wiki
Register
Don't have an account?
Sign In
Advertisement
in: Articles with derivative titles, Items, Articles with non-canonical information,
and 3 more
English

Contains the Jamba Heart in its seal, allows Kirby to befriend enemies (Friend Hearts), upgrades the Friend Star into the Star Allies Sparkler.
The Heart Spears (also referred to as spears of the heart in English) are objects introduced in Kirby Star Allies.

The Heart Spears are usually in a group of four, representing the four heroes of yore. The top of the spears is heart-shaped. Each spear has two small, sharp blades on two of its sides and a large, long blade.

In the ancient past, the Heart Spears were wielded by four warriors, together known as the four heroes of yore. According to the book of legend, which was presumably written by the ancients, people of the past who made legendary treasures and pieces of technology, likely those of Hyness's clan, the four heroes used the Heart Spears to seal away a Jamba Heart that apparently emerged from a dimensional rift,[1] and was producing darkness. After that, however, the four heroes mysteriously vanished, and were never seen again. Galacta Knight is heavily implied to be one of the four heroes, and he was sealed away multiple times throughout the ages in fear of his power, but it is currently unknown what has become of the other three.

At the beginning of Kirby Star Allies, the Heart Spears can be seen containing the Jamba Heart in its seal. Hyness sought to break the seal, as Void, the god of the Jambastion Religion, could use it as a vessel to reincarnate, and Hyness wanted him to reincarnate as Void Termina so he could use his power to destroy the universe to avenge his clan. However, Hyness did not fully understand how to break the seal, and as a result, the ritual went wrong, causing the Heart Spears and the Jamba Heart to shatter, sending their shards across the galaxy.

The Heart Spears were responsible for creating the pink shards when the Jamba Heart shattered. One of these pink hearts fell onto Kirby, which granted him the ability to create Friend Hearts, objects that allow Kirby to befriend enemies.

Later, the Heart Spears somehow return and resonate with Kirby and company's friend power, upgrading the Friend Star into the Star Allies Sparkler in order to defeat Void Termina, who was successfully resurrected.

The Heart Spears make one last appearance in the Heroes in Another Dimension sub-game. After each boss is defeated, they drop a Heart Spear, allowing Kirby and friends to collect it. In the Final Dimension, the collected Heart Spears appear and pierce a Jamba Heart that was created by the darkness in Hyness's heart, shattering it and unleashing Corrupt Hyness.

During the fight with Aeon Hero (Dark), he will occasionally fly into the background and create many Heart Spears, in which he will then send them flying to the foreground from either side, as they then reflect off the ground and to the other side at an angle. This attack is identical to his sword-like projectile onslaught from the background in his previous forms, albeit they cannot be blocked. 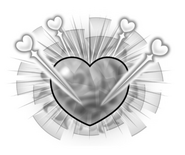 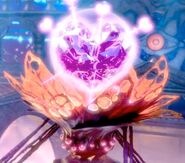 The Heart Spears containing the Jamba Heart in its seal.