A world of chaos and stars

Chef Kawasaki, Iron Mam
The Eternal Star Halfmoon is the furthest star in Kirby Super Star’s Milky Way Wishes sub-game, being covered in eternal night. Milky Way Wishes is a non-linear game, so the stage can be played at any time - however, it is the last "official" star of Milky Way Wishes.

Halfmoon has two parts: One half having strong winds and chaos, and the other half being covered in stars.

The chaos is the first half of the star. Those floors have high winds and fierce enemies that are either powerful or can fly. The other half is made of space-like objects, such as stars and comets. In the first room of this part, Kirby must ride a Mine Cart to destroy the stakes. 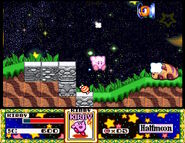 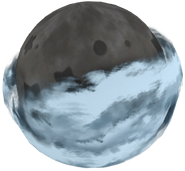