Halcandra is a planet introduced in Kirby's Return to Dream Land. Like the Halberd before it, it is a play on the name of HAL. It is claimed to be the home planet of Magolor, an alien whom Kirby kindly helps throughout the game. Its terrain is generally volcanic with many mechanical facilities.

Kirby travels there after collecting the five parts of the Lor Starcutter, including the last one nearly lost by the Grand Doomer of Nutty Noon. While Halcandra exists in another dimension, the repaired Lor Starcutter is able to cross dimensional tunnels and reach it instantaneously.

This planet contains two world levels: Egg Engines and Dangerous Dinner. The boss of Egg Engines is Metal General, who - if the game is played in Extra Mode - somehow acquires HR-D3. The final boss of this planet is Landia, a four-headed dragon that shot Magolor's Starcutter down.

More interesting is the civilization that existed on Halcandra known only as the ancients. They are said to have created many legendary treasures and left Landia to protect their valuables. They not only created the original Starcutter and Master Crown, but are also implied to have a hand in Nova, the Star Rod, and HR-D3. 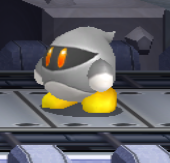 The replacement for Waddle Dees

The replacement for Bouncies 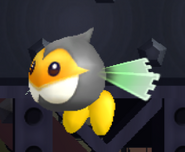 The replacement for Bronto Burts

The replacement for Armored Waddle Dees

The replacement for Bowby
Add a photo to this gallery
Retrieved from "https://kirby.fandom.com/wiki/Halcandra?oldid=122568"
Community content is available under CC-BY-SA unless otherwise noted.