HR-H is an AI robot in the Kirby series, appearing in Kirby 64: The Crystal Shards. It is the boss of Shiver Star, appearing in an apparently long-abandoned, high-tech city. Like many of the bosses in the game, the fight with HR-H is done in two different phases. Unlike many bosses, however, HR-H actually takes on a whole new form as the fight progresses. After Kirby depletes his health the first time, HR-H turns into a rocket-shaped robot known as HR-E and starts to pursue him across the metallic road suspended high in the city's sky.

HR-H is a strange lighthouse-shaped robot with impenetrable armor. Because his armor is so tough, Kirby must instead target his weak point: his arms (and later, his shadowy body when he becomes HR-E).

HR-H is activated when Kirby enters a desolate cityscape in the heart of Shiver Star. The battle begins with the fight against HR-H, the robot's first form. As HR-H, the boss has a total of four attacks. Two of these attacks (neither of which leave HR-H open to attack) include shooting out large missiles that crash into the ground, and projecting a thin yellow laser from his beacon onto the stage that swiftly sweeps across the screen. To damage him, Kirby must wait for him to perform an attack with his arms. These two attacks include sweeping his arm across the platform, and slamming his hands into the center of the stage. With the use of an ability or just regular projectiles, Kirby must damage these hands in order for the second phase to begin.

The battle turns into a side-scroller as the robot turns himself into the snowmobile-like HR-E. While Kirby runs away from HR-E, he tries to snip Kirby with his claws and hit him with missiles. There are two types of missiles that he shoots, one being the type of small ones that HR-H used, and the other being a new, larger type. When Kirby tries to inhale the larger one, it breaks into two halves, and the back half continues to plow into Kirby if he doesn't avoid it by jumping. At half health, HR-E will fly up into the sky and then crash down in an attempt to crush Kirby. The platform eventually runs out, meaning that HR-E must be dealt with quickly. In this form, Kirby must damage his dark core in order to destroy him completely. 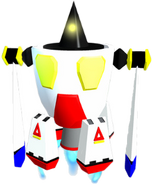 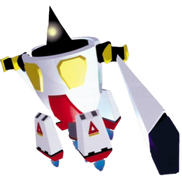