Kirby Wiki
Register
Don't have an account?
Sign In
Advertisement
in: Articles with non-canonical information, Enemies, Characters,
and 9 more
English

HR-D3 is a giant mechanical construct that looks vaguely similar to King Dedede. It is best known for debuting in released material for the unreleased Kirby GCN, but it also makes an appearance in Kirby's Return to Dream Land as a boss.

HR-D3 is a giant robot built in the likeness of King Dedede. Rather than the bulky appearance of the previous model, this robot is more streamlined in design and is outfitted with more weapons. It bears a similar drill for a hand, but has a giant laser cannon hidden inside its neck. It has painted patterns that somewhat resemble Dedede's robes, and has his trademark "peace" symbol on its chest. The HR part of its name might stand for "Halcandra Robot," but it is likely a reference to HR-E. The D3 part is a reference to King Dedede.

The version appearing in Egg Engines is different in coloration, and its interplanetary appearance implies that the ancient civilization of Halcandra initially created it. Its design is slightly different; its color palette being changed to reflect Metal General EX's, and even having Metal General EX's head as its symbol instead of King Dedede's peace symbol. Also, the pompom-like structure on its head is replaced with Metal General's fin. Other than a new paint job, however, this incarnation of HR-D3 is otherwise identical to the other except for having the Metal General inside its cockpit.

HR-D3 was set to debut as a boss in the cancelled GameCube title Kirby GCN. It would have been fought with the camera angled, focusing slightly more on its side, and the characters fighting it were shown minimized (however, there is a chance that this was done during the trailer for aesthetic purposes). Characters could travel behind it, as evidenced by Kirby in the game's trailer. It is unknown whether or not it would've been fought like this the entire battle.

HR-D3 made its official debut in the series as a cameo in Kirby Mass Attack. It is the boss of Chapter 2 of the sub-game, Kirby Quest, and has a staggering 2500 HP. It can hit the Kirbys with its drill (an attack that KOs four Kirbys), or fire a giant orange laser from its mouth (which KOs six Kirbys). It is fought in the same arena as King Dedede himself. HR-D3 is given its Kirby GCN design, likely as a reference to the cancelled game.

HR-D3's appearance in Kirby Mass Attack was merely a precursor to a much larger role in the Extra Mode of Kirby's Return to Dream Land as the "second" boss of Egg Engines, where the beaten Metal General EX interfaces with it in order to defeat Kirby.

HR-D3 mainly attacks by slamming its giant fist and drill into the ground. It will do this once with each arm before flying out of range, where it will perform one of three attacks: it will shoot eye lasers in a wide arc, have its pilot open its cockpit to rain down missiles on Kirby, or heat up its weaponized arms and spin them around on the ground. Note that in this phase, it is very similar to HR-H, who is HR-D3's namesake. After its surprisingly small health meter is depleted, HR-D3 is seemingly defeated and sinks off-screen. But seconds after this happens, the robot revives itself and comes back, revealing its second "true" shell.

HR-D3 gains new attacks in this second form. Upon re-entering the battlefield, it will bounce on the ground three times, trying to crush Kirby as it approaches one of the edges of the arena. Then, it will always open up with one of two attacks:

It may once again try to punch and impale Kirby (the latter sometimes being electrified and therefore dealing more damage) which can now be performed three times in a row, or perform an aerial version of its heat sweep attack. Throughout the battle, HR-D3 will rotate between these four aforementioned attacks, depending on its positioning in the arena. HR-D3 also has much more health during this second battle, and will sometimes fly into the background to use the laser and missile attacks it used in its first phase. Throughout the battle, it loses more parts based on the amount of damage it takes (similar to Robo Dedede in Scope Shot), until becoming nothing more than a steel-frame skeleton, two headlights, and an engine. After being defeated once more, the arms explode and the robot is taken down for good.

As Kirby Quest is not a story-based sub-game, the events in said sub-game are non-canon; the same would go for the battle against HR-D3, however, its existence may be canon.

The battle against HR-D3 in Kirby's Return to Dream Land is non-canon, as Extra Mode is non-canon in the game. However, this one's existence is rather ambiguous, as it could have been built by the ancients, but its similarity to Robo Dedede in Kirby's Dream Course, its paint job, and how King Dedede was able to make one, are unexplained. 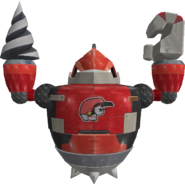