Gryll is the final boss of Kirby's Super Star Stacker.

Gryll is a witch with a cheerful, upbeat personality. They have peach colored skin with a pair of light orange stripes on each cheek, a tuft of bright green hair, and emerald eyes with thick eyelashes. They wear bright red shoes with large white trims, white gloves and a very large yellow and purple striped witch's hat with a miniature Star Block on the end. Their minions are also portrayed as onions, with white gloves and red feet and a light green wisp, like Gryll.

Gryll is also shown to carry a broom with a purple string at all times. The witch can use it to fly and is also shown to use it as a weapon; Gryll can comically bonk Kirby on the head with it after performing a particularly high combo.

During the course of the game, Gryll somehow finds their way to Planet Popstar with their three comrades, Salt (the happy one), Pepper (the angry one), and Sugar (the sleepy one), and decides to challenge the planet's most skilled Star Stacker--who turns out to be Kirby.

Gryll shows up to give Kirby one last challenge after he beats King Dedede. In order to face Gryll, Kirby must have also beaten all other competitors without having to use a continue at any point. In their conversation prior to the battle, Gryll shows great confidence in their abilities; this confidence proves to be well-founded, as in spite of their playful nature, they prove to be a difficult opponent for Kirby, engaging him in a fierce duel. When they are finally beaten at their own game, Gryll (with a now-broken broom) and their three onion henchmen are seen beaten-down and weary-eyed among a tumbled-down collection of blocks.

Gryll appears as a primary, Novice-class grab spirit in Super Smash Bros. Ultimate. Their spirit sports no effect when applied to a fighter. 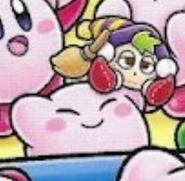