30 HP
Grumples is an enemy in the Kirby series, debuting in Kirby's Dream Land.

Grumples has a pentagonal shape for a body and he has two semicircular eyes tilted down. In Kirby Super Star Ultra, his mouth resembles the shape of a boomerang whereas in Kirby's Dream Land, Grumples' mouth is more an old telephone shape.

Grumples serves as the Extra Game equivalent of Kabu, appearing on Float Islands. It is stronger than its counterpart, inflicting two points of damage when it makes contact with Kirby. It attacks just like Kabu by disappearing and then reappearing, but is more unpredictable and frantic. It can also pass through walls in its pursuit of Kirby.

Grumples appears in the Revenge of the King sub-game, where it replaces Kabu once again. Its behavior has changed little since Kirby's Dream Land, but since Kirby has a longer, non-regimented health bar, Grumples is less of a threat. It appears on Illusion Islands. 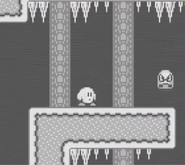