King Dedede bounces across drums in the daytime while collecting Musical Coins. Green trees, a Ferris wheel, a castle, and various other structures decorate the background. The sun and clouds appear as cardboard cutouts suspended in the air by strings.

The player learns the ropes of Dedede's Drum Dash here. As a result, this stage is designed to be extremely tame; the tempo is slow, all the drums are basic, and there are only three large gaps to bounce over. Two Bronto Burts hover in place and two Bouncys bounce up and down, however, so the king should not be careless. The stage ends when Dedede reaches the Goal Drum and launches skyward.

The music that plays here is a rearrangement of "Green Greens" from Kirby's Dream Land. The player is given two minutes to clear this stage. 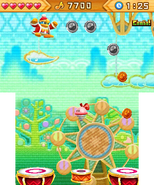 Retrieved from "https://kirby.fandom.com/wiki/Green_Greens_(Dedede%27s_Drum_Dash)?oldid=317349"
Community content is available under CC-BY-SA unless otherwise noted.