Green Greens is the first stage in Kirby's Dream Land and the first level in the entire Kirby series. It is a fairly simple level designed to teach players the controls and basics of the game.

The level is located in a verdant grassland near a lake. Midway through the stage, Kirby takes a Warp Star across the lake to a small forest where he fights Poppy Bros. Sr. and then has to climb up the inside of a hollow tree to reach the stage's boss; Whispy Woods.

Kirby is chasing a butterfly. As he chases it off screen, a strong wind picks up and blows him and a bunch of other butterflies away.

Green Greens is a simple stage consisting of three areas: Kirby starts in a lakeside grassland with easy enemies and few obstacles. This area has weak enemies such as Waddle Dee, Cappy and Bronto Burt. At the end of the grassland Kirby reaches a cliff and grabs a Warp Star flying across the lake to a forest in the background. As soon as Kirby lands the Warp Star he's ambushed by the stage's Mid-boss, Poppy Bros. Sr.. Poppy Bros. Jr. are common enemies in the forest, some balancing on apples or riding Grizzos. At the end of the forest is a giant hollowed-out tree. Kirby enters the tree from the end of the forest and has to climb to the top, avoiding angry Grizzos until he reaches the boss door and from there jump down to do battle with Whispy Woods.

Green Greens appears in Super Smash Bros. Melee as one of the playable stages representing the Kirby series. It is available from the start and doesn't need to be unlocked. It is considered to be one of Kirby's home stages (alongside the Fountain of Dreams) and Kirby is fought on this stage in the single-player modes. The stage is made up of three floating islands. The island in the middle is the biggest, and there are two floating platforms above it. Whispy Woods, who is on the middle island, will occasionally blow wind in the direction with more fighters to disrupt the fight. He can also shake and drop apples. The apples can be thrown at opponents, used to heal, or can sometimes explode. Between the islands are Star Blocks and Bomb Blocks that stack up. Players can break the blocks by attacking them. If a player hits a Bomb Block, then there will be an explosion. The blocks will rebuild often after they are destroyed.

Green Greens is a Melee Stage in Super Smash Bros. Brawl, unlocked by playing as Kirby in twenty Brawls.

Green Greens' name is derived from the color "green" and the term for various leaf vegetables called "greens" such as lettuce, spinach, kale, and others. Both are used to refer to the lush green vegetation of the area. 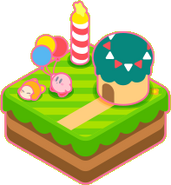 A view of the landscape in Green Greens.

The glade where Whispy Woods is fought.

The intro, as it appears in Kirby Super Star.