Grape Garden is the fourth level of Kirby's Adventure and its remake. It comes after Butter Building and before Yogurt Yard.

Kirby floats in the breeze while carrying three balloons. As the wind picks up he loses grip of one of the balloons and tries to grab it back. But by doing so he accidentally lets go of another one. Kirby's weight is too much for the one balloon, and the other two have already floated away. Kirby loses his grip once again and he crashes face-first down in the clouds below.

The intro is the same in both versions of the game, but in Kirby's Adventure, the balloons were all red-orange.

Grape Garden is a peaceful area located high above in Dream Land's skies. It is a fair-weathered area filled with puffy and billowy clouds. It is also made up of many fantastic castles and is often visited by large airships and blimps passing through the area. The wind here is generally peaceful, but the wind around the airships is very turbulent. Deep below Grape Garden is a dark forest. The boss of Grape Garden is Kracko.

Grape Garden has a total of six stages in addition to a Crane Fever room (replaced by a Bomb Rally room in the remake), and a Quick Draw room. It also has a Museum featuring Noddy and Bubbles, and an Arena featuring Bugzzy.

Grape Garden is also alluded to in Revenge of Meta Knight, where Meta Knight orders the Halberd’s crew to fly there for a quick test run. 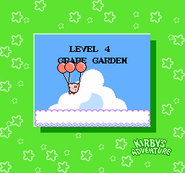 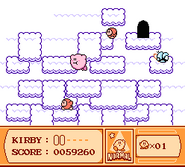 High above the clouds in Grape Garden (remake)

On one of the blimps traveling through the area (remake)

Kirby, about to enter one of the large-scale castles (remake)

Interior of one of Grape Garden's fanciful castles (remake)

The peaceful sky as seen from Grape Garden (remake)

The interior of another castle (remake) 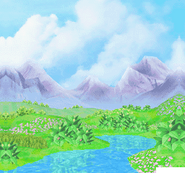