Grand Wheelie is a giant Wheelie that first appeared as a mid-boss in Kirby's Adventure and its remake. Like its smaller counterparts, it gives the Wheel ability.

As stated above, Grand Wheelie is simply a huge Wheelie; because of this, it is sometimes criticized by fans for its unoriginal design. Grand Wheelie's behavior, however, is much more menacing than a regular Wheelie, stomping and charging about madly and actively trying to run over Kirby. Unlike the other bosses, its design was given minimal changes besides its eye size and body shape, until Kirby: Triple Deluxe, where it received a modernized update with a heavy-duty harness and motor. It also learned new moves since its last appearance, becoming more versatile. This updated version of Grand Wheelie bears a heavy resemblance to its incarnation in Kirby Air Ride, but with yellow armor instead of red. Its eye is blue and always narrowed angrily with a grey eyelid. Its upgraded version, Grand Wheelie DX, sports red armor on it and its eye is a glowing yellow with an orange grill covering most of it.

When Grand Wheelie is defeated, Kirby can inhale it for the Wheel ability. It appears in Kirby Super Star Ultra, replacing Bonkers as an optional mini-boss in Crash Clouds in Revenge of the King (although the player cannot skip the fight once he/she is in the arena, as the door won't appear until Grand Wheelie has been defeated), and a re-colored version is also one of the mini-bosses in the last level of Revenge of the King, The Revenge. It also appears as the second mid-boss as part of the "True Mid-Boss All-Stars" team in The True Arena. 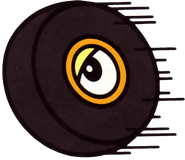 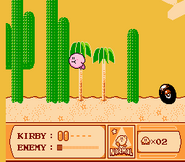