The goal of Gourmet Race is to play as Kirby, go through the three courses, eat more food than King Dedede, and finish first. There are no enemies to fight, and Kirby cannot lose a life even though there are Spikes in some parts. There is a time trial mode, where players race to beat their own records in one of the three courses. The previous best time is represented as a ghost that takes the same path as the player took. In its incarnation in Kirby Super Star Ultra, player two can join the race as Yellow Kirby.

Kirby gets one point for every unit of food he eats, and three points for every Maxim Tomato, which are less common and harder to get to. By reaching the finish line first, Kirby gets a bonus of 30 additional points, giving a possible maximum bonus of 90 points if Kirby wins all three stages.

Kirby runs much faster than usual in Gourmet Race, and is faster than King Dedede on the ground. However, since he just exhausted himself floating up the mountain, his floating, Slide attack, and jumping skills are slower and much less effective, and King Dedede is faster than him in the air.

In the last course, Onion Garden, Kirby can use a Copy Ability from a Copy Essence. The five pedestals from left to right are Jet, Parasol, Ninja, Wing, and finally, Wheel. One can also choose to do a time trial run of one of the three courses. 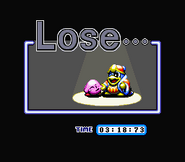