Kirby Wiki
Register
Don't have an account?
Sign In
Advertisement
in: Articles under construction, Levels, Levels in Kirby: Triple Deluxe,
and 2 more
English

King Dedede bounces across drums in the evening while collecting Musical Coins. Brown trees, a Ferris wheel, a castle, and various other structures decorate the background. The sun and clouds appear as cardboard cutouts suspended in the air by strings.

As an intermediate stage, Gourmet Go Go is designed to be more challenging than the previous stage. The tempo is slightly faster and winged drums appear; they move side to side slightly, which can trip up the player if he/she is not paying attention. Many enemies also inhabit the stage: Gordos and Big Gordos hover in the air, Soarars swoop in and out of the foreground, and Bronto Burts and Bouncys move more than they do in Green Greens. The stage ends when Dedede reaches the Goal Drum and launches skyward.

The music that plays here is a rearrangement of "Get Up and Go-Urmet!" from Kirby Super Star. The player is given two minutes to clear this stage. 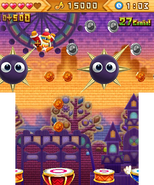