Boss
Goriath is an abominable creature that appears in Kirby's Return to Dream Land. He serves as the boss of White Wafers and holds the Lor Starcutter's emblem.

When Kirby first enters the arena, Goriath will leap out of the sky in order to confront him, at which point he smashes the ground they stand on and the battle begins.

Goriath is a white yeti with red markings on his face and wrists. He sports a gray goatee and a long lock of gray hair. His beige face also features black eyes and noticeable jowls. When Goriath gets angry halfway through the battle, his eyes turn red and his hair and goatee turn golden-yellow. In this state, he also gains an ominous red aura.

In Extra Mode, Goriath EX now has dark gray skin, and his tress of hair and goatee are bluish gray. When he gets angry, his hair turns gold and his white eyes turn red like before. His facial markings are purple instead of orange and his wrists are now brown instead of red. His fur remains white.

Goriath mainly attacks by scaling the walls of the battlefield and throwing snowballs at Kirby, which can be inhaled for the Ice ability. Standing directly under Goriath while he does this attack is an easy way to avoid it. When he is on the ground, he can extend his fist outward and try to punch Kirby from a long distance. Sometimes, Goriath will glow with a pink aura; when the yeti does this, he will attempt to ground pound Kirby and his friends.

After half his health is gone, Goriath will become angrier; his gray hair will turn blond, and a pink aura will be emanating from his body. Goriath will pound the ground until it breaks, changing the surface of the arena. The large yeti will usually hold his arms back, preparing an energy blast (similar to that of the Fighter ability), and will then release it in three separate bursts; hovering above Goriath is an easy way to avoid the attack. Goriath's ground pound and punches also become faster and more powerful. When he clings to the walls, he will throw two snowballs, followed by two icy spiked balls that stick to surfaces, and another spiked ball. He can charge up and ricochet off the walls several times before trying to divebomb into Kirby. Goriath can also create four large stalactites by slamming the ground. After a certain bit of his health is gone, he will break the floor the contenders are standing on, completely changing the arena once again.

After Goriath is defeated, he will get launched off the platform and will comically freeze in mid-air. Looking down under himself, he then realizes he is no longer on the ground, and he panics in shock. After that, he will fall offscreen while giving a final grunt. The ground Kirby stands on breaks once more, and the Lor Starcutter's emblem lies in the center of the bottom floor. 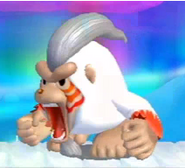 Goriath clinging to the wall about to launch an attack.

In Extra Mode Goriath EX can throw one large snowball twice or two large snowballs at a time. He can jump from opposite walls much faster. Goriath's ground pound is now significantly faster and has a larger radius. When he pounds the ground, four spiked ice balls that explode upon contact with Kirby, two on each side, will emerge from the ground. These can be sucked up and spit back at him or be inhaled to give the Ice ability. Goriath can also try his stretching arm attack twice in a row rather than one time.

After Goriath EX has lost a little more than half his health, he will become stronger and his hair becomes yellow once again. After pounding the ground and breaking it, he will shroud himself in a purple energy ball. This attack does devastating damage if not avoided. Goriath can ricochet off the walls much faster and for a longer period of time. His energy blast attack goes much faster and he can shoot seven of them. His arm attack and his ground pounding attacks remain the same. Goriath EX can create stalactites much faster and these ice structures fall much faster as well. When clinging to the wall, Goriath EX may throw four ice spike balls. Like his main game counterpart, he will destroy the ground after taking a certain amount of damage. When he does this, his energy ball attack becomes much quicker.

After Goriath has been defeated, he will fall off the stage like he did in the previous battle. Kirby and his friends will be rewarded with the Lor's Emblem once again.