Expands into a large temporary hazard

In Kirby Air Ride, Gordo Balls resemble normal Gordos when held, but when thrown, they become massive in size.

In Kirby Fighters and its sequel games, the unactivated Gordo Ball is a small black sphere resembling a Gordo, but without the spikes.

Gordo Balls appear as Patches in City Trial. They can appear on their own, or can be obtained by destroying Green Boxes. Obtaining a Gordo Ball item allows the player to throw up to three Gordo Balls that greatly expand in size upon being thrown. Taking damage will cause the player to drop the Gordo Ball, but it still does the same amount of damage despite not expanding in size.

The Gordo Ball appears in the Kirby Fighters sub-game, as well as the downloadable Kirby Fighters Deluxe. Kirbys can carry it and throw it where upon impact, will expand and jut out its spikes, being a large hazard. The angle in which a Gordo Ball can be changed depends on the direction the player is holding. If a Kirby is holding a Gordo Ball, getting with with multiple moves or by a strong move will drop the Gordo Ball causing it to expand. Any Kirby that comes into contact with it will take damage and any item that is pushed into, spawned on top of, or is in the way of an expanded Gordo Ball is destroyed. An expanded Gordo Ball will also destroy weak projectiles. Gordo Balls can appear randomly on stage and inside Blue Boxes.

Gordo Balls reprise their usage from their previous games, however their existence is more prominent. Gordo Balls can now appear in both a Blue Box or an Ice Container, and in the random chance of an Event Stage in Story Mode: The Destined Rivals, Gordo Balls will be the only item that spawns in that stage. There also exists a Anti-Gordo Charm that can be collected in the Item Room which will reduce the amount of damage taken from an expanded Gordo Ball by 75%. 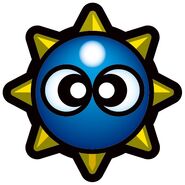 Kirby Fighters 2
Add a photo to this gallery
Retrieved from "https://kirby.fandom.com/wiki/Gordo_Ball?oldid=344056"
Community content is available under CC-BY-SA unless otherwise noted.