Gordo is not legally an enemy, and doesn't really hunt the player. They can't be destroyed by anything, not even Crash and Kirby can't inhale it, all he can do is avoid these foes or force them down to a pit or out of play. Gordoes are also weapons of certain bosses.

Gordos are small blue metal balls with two big eyes, and have 8 spikes on its side that move in and out in unison. Gordos normally floats in patterns the air, either stationary, moving in a pattern back and forth, or sometimes up and down. They also bounce around fast, but rarely.

Also, if you pay extremely close attention to Gordo, you may notice his two eyes will blend and split again.

This is Gordo's first appearance. He appears in every level except Green Greens on normal difficulty. If Kirby is hit by Gordo in this game it will cost him dearly as Gordo takes away three HP, which is half of his maximum health. Gordo can even be found underwater.

Gordo is not replaced in Extra Mode, however the Gordos that were already there now move faster and more erratically. Also many of the bosses and mini-bosses now incorporate Gordo into their attacks such as Whispy Woods dropping them from his branches or Lololo kicking them along with his boxes.

Gordo's behavior hasn't changed from Kirby's Dreamland, except he no longer takes away three HP, making him less of a threat. This behavior is used in all other Kirby games following.

Gordo makes an appearance in almost every Sub-game of the original and its remake. They retained their basic styles of either remaining in one spot or moving in a set pattern and flash yellow intermediately with their standard color to denote their invincibility. They are usually in locations that are inconvenient to the player, such as a windy area or a path the player needs to take, thus making it more likely for them to hit and damage Kirby. Gordos also feature as attacks used by Whispy Woods and Twin Woods, and also prominently used by Bosses in Revenge of the King from the remake, most noticeably Kabula, who uses them as projectiles shot from her cannon.

Although Gordo appears rarely in the game, (only about 2-3 levels contain Gordos) mixing the Needle and Bomb Copy Abilities allows Kirby to transform into a Gordo. (albeit, it still has Kirby's eyes) In this form, Kirby can move only left and right, but otherwise behaves exactly like a Gordo. Gordo can be destroyed in the fight with Acro, by beating Acro while there is a Gordo on screen. Gordo will "pop" the same way any other enemy does when defeated.

Gordo appears as an item in this game that can be obtained from Green Boxes, however, there was a mistranslation and it was called 'Golden Spikes'. The item allows Kirby to throw three massive, building-sized Gordos at his enemies. These cause massive damage if a another racer hits them. He also appears as an obstacle in Air Ride courses, especially in Time Trial Mode.

In Kirby Canvas Curse, it is drawn in Paint Panic.

Gordos later appear in Super Smash Bros. Brawl as part of one of King Dedede's attacks. He will occasionally throw a Gordo instead of Waddle Dee or Waddle Doo. These Gordos are more powerful and deal more damage but are much rarer than the other two enemies. Gordos are known to home in on opponents. Gordos also appear in his Final Smash, the Waddle Dee Army.

Gordo also appears as a Trophy and a Sticker in Super Smash Bros. Brawl. The sticker uses its design from Squeak Squad.

Gordo may also be the inspiration for the enemy Jyk in Super Smash Bros Brawl's Subspace Emissary as they share the same purpose; indestructible enemy that floats around, usually in a set pattern. 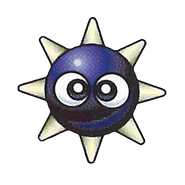 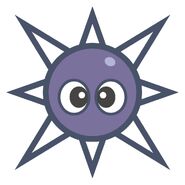 Kirby and the Amazing Mirror
Add a photo to this gallery
Retrieved from "https://kirby.fandom.com/wiki/Gordo?oldid=68789"
Community content is available under CC-BY-SA unless otherwise noted.