Stone, Fighter, or Wheel (depending on their coloration)

Regular enemy, Large enemy, Helper (Kirby GCN)
Golems are rock-like creatures native to the Mirror World, and they also appear to be minions of King Golem. Golems first appeared in Kirby & The Amazing Mirror as a common enemy. Golems come in three colors, each of which can give Kirby a different Copy Ability. They are most commonly seen in a brown color, which always give the Stone ability when inhaled. The gray ones are almost as common and give Fighter if inhaled when throwing punches, otherwise they give Stone as well. The yellow ones are the rarest of the three and give Wheel if inhaled when they are rolling about, otherwise they too, default to giving the Stone ability. Since Golems are large enemies, Kirby needs to super inhale them in order to get them into his mouth.

It was also going to be both an enemy and Helper in Kirby GCN, until it was cancelled.

King Golem is the ruler of the Golems and is fought as the first boss in the game.

Golems were seen in various pre-release screenshots and in the trailer of the game, but not much is known about their would-be appearance in this game aside from the fact that their in-game models were based off the Golem trophy from Super Smash Bros. Brawl, albeit at a lower quality and more blocky. It is apparent that Golem were meant to be the Helpers for the Stone ability in this canceled title (as seen when Kirby generates one by giving up his Stone ability). It is unknown however if Golem would provide any different abilities like they did in Kirby & The Amazing Mirror, leaving their behavior and form of attacking in this game a mystery. It was also seen in the trailer that Golems were slightly more slow moving than other enemies in the game, most likely due to their particularly bulky stone bodies.

Although this game was not released, it would have marked their first appearance as an enemy outside of the Mirror World, and their third overall appearance in the series (second if not counting the Super Smash Bros. series).

A Golem appears as a keychain in Kirby: Triple Deluxe.

A Golem appears as a collectible trophy in Super Smash Bros. Brawl.

Golems originate from ancient Jewish folklore. They are large creatures made from stone and clay that are brought to life to carry out deeds for its creator/owner. 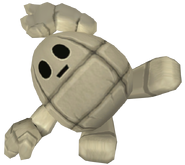