Gold Waddle Dee is an enemy in the Kirby series, debuting in Kirby: Squeak Squad. It is a member of the Waddle Dee family.

As its name suggests, Gold Waddle Dee is a golden Waddle Dee. The enemy's shade varies from game to game, appearing more yellow and green in Kirby: Squeak Squad and more brownish-gold in Kirby Mass Attack. It has brown feet in Kirby's Dream Collection Special Edition.

Gold Waddle Dee runs from Kirby as soon as it spots him. If it is inhaled or defeated before it escapes, it drops a Treasure Chest. If it is attacked with the Bubble ability, it turns into a bubble containing a star, and a chest is dropped in the same place. When Kirby opens the chest, the contained treasure is a piece of the Secret Map. Kirby must often solve some sort of puzzle to trap it or race to catch it before it falls off a cliff and gets away. Gold Waddle Dee is no more durable than its more common counterpart.

Gold Waddle Dee appears exclusively in Stage 6 of Dedede Resort. Like in Kirby: Squeak Squad, it flees from the Kirbys. If it gets far enough, it will burrow into the ground, successfully escaping. Defeating the Gold Waddle Dee and clearing the stage accomplishes the "Gold Thrasher" task on the game's Checklist. The enemy is also one of the things that can be fished out of the water in the Fishing Pond sub-game during the staff credits. 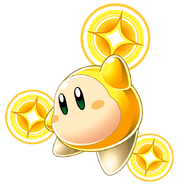 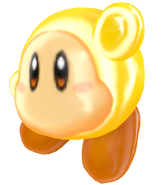