Gobblin is a green, snake-like cactus enemy found in the desert levels of Kirby 64: The Crystal Shards. It waits for Kirby to come near so that they can try to bite him. Kirby can inhale its head, which yields no Copy Ability when swallowed. If Kirby holds a Gobblin head over his head, it will continue to chomp continuously.

Gobblin's name is likely based off the term "gobble," which means to devour voraciously. The name also sounds like the mythical monster known as the "Goblin." 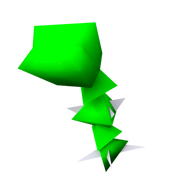